“We had a lot of energy and ideas, but we really needed an objective analysis and a fresh perspective.” — Dan Kirkpatrick, Mayor, City of Fairborn, Ohio

CLIENT:  Like many American cities that experienced significant growth for several decades after World War II, Fairborn, Ohio, (population 33,000, located in the western part of the state, near Dayton) found itself beginning to stagnate in the mid-1970s.  Completion of Interstate Highway 675—which bypassed the city—deterred traffic and new customers for local businesses.  Meanwhile, the adjoining town of Beavercreek (located closer to a highway interchange) grew, with newer housing, schools and shopping centers. Fairborn city officials, engaged the CRE Consulting Corps to create a revitalization strategy.

CHALLENGE: City leaders had already identified a number of sites for potential redevelopment but agreed they needed a fresh perspective. The Fairborn assignment began as a request to analyze and make recommendations for redevelopment of one property—the Skyway Retail Center—a functionally obsolete and largely deserted shopping/office development. The project changed dramatically, however, once the team was onsite in Fairborn, met with stakeholders and team members were able to view the property and the city. 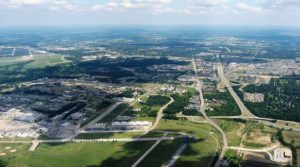 ASSESSMENT: The team reviewed market data and conducted interviews with 20 government, business and community leaders.  A SWOT analysis revealed Fairborn’s strengths, including excellent medical services, proximity to Wright Patterson Air Force Base (largest employer in the state), the Air Force Museum, and Wright State University which has a student enrollment of 19,000.  The city is also pro-growth, progressive and business-friendly.  Downtown businesses, an eclectic mix of retail and service  providers, are located in historic buildings, and new streetscaping is in place.  Fairborn’s parks are numerous and large.  However, lack of investment and economic development over the past several decades was a decided weakness, and lack of convenient public transit limits how easily people from the Air Force base, museum or University can access the businesses and recreational attractions Fairborn offers.  Ultimately, the scope of the project was expanded to include downtown Fairborn and an area adjacent to Wright State University.

RECOMMENDATIONS: The team determined short-and longer-term goals for the city. Rather than focus solely on the Skyway Retail Center, immediate action steps also addressed Fairborn’s central business district, including strengthening its downtown business association and focusing resources on promoting the history of Fairborn and its unique shops and businesses. The team’s strategy also emphasized creating a “destination” in the CBD, which already is home to a new business incubator.  They advised active partnering with the Air Force base and Wright State University, creating activity-based entertainment venues and establishing a motorized trolley to enhance access to downtown. As for the Skyway Retail Center: the team believed a Citizen Services, Health and Wellness Center would be a successful development and convenient concentration of service businesses.

Longer-term, the team prioritized redevelopment of several other targeted sites, and made recommendations for each, identifying commercial and residential opportunities, including mixed-use, hospitality, retail, and student housing.

“The report is a strategic action plan. It’s a road map that contains achievable, affordable action steps to continue to enhance Fairborn and its assets.” — Pete Bales, Interim City Manager, City of Fairborn