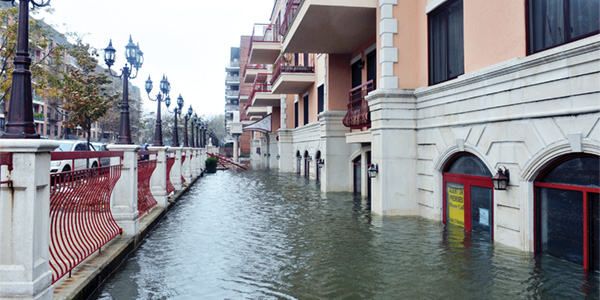 Brooklyn, New York, October 30, 2012: Serious flooding in the buildings at the Sheepshead Bay neighborhood due to impact from Hurricane Sandy.

The 2019-2020 Top Ten Issues Affecting Real Estate listed “Weather and Climate-Related Risks” as issue number three. That topic has been covered in The Counselor and many other publications and documentaries and while we need to address the global risks, we must also stay on the alert for the property-related environmental issues we face daily. This is the first in a three-part series that will address Legacy, Redevelopment, and New Development.

Legacy issues are those which have been associated with real property and improvements since acquisition or since before implementation of proactive environmental management programs. These include environmental facets of real property that can generally be safely managed in place with appropriate plans and barring unforeseen events or circumstances. These may include hazardous building materials, such as asbestos or lead based paints, or former contamination issues associated with the land itself such as underground storage tanks (USTs) or residual contamination from former industrial uses. These are common in many redeveloped older properties or brownfield redevelopment sites. When these issues are fully documented, and the owners have management plans in hand to manage them in place, they still must be accounted for in the long-term management of the asset.

It is said that familiarity breeds contempt so it is easy to understand how, over time, these issues may become less of a focus and their management becomes routine. This is fine, as long as the routine management is comprehensive, and the situations under which the conditions exist remain the same. For example, managing asbestos materials in place is acceptable, as long as the materials remain in good condition, are serving their intended purpose and facility staff are aware of them and properly trained in their management. However, under a proactive materials management plan, these materials should be undergoing proper removal with each major maintenance effort or systems change. Then, over time, the complete removal of these materials is accomplished, obviating the need for in-place management. This requires remaining aware of the legacy conditions associated with the real property and improvements and updating plans to proactively manage them out of existence, where possible.

Other legacy issues, like residual contamination from former site uses such as USTs or industrial solvent contamination may have been fully addressed to the satisfaction of regulatory authorities at the time the remediation was performed. But are the evaluative criteria or residual contaminant levels still considered to be fully protective of human health and the environment? Many cleanup levels and remediation methods have been refined and improved over time to be more effective and to eliminate exposure pathways that were not considered in the original closure requirements. These newer understandings designed to produce lower levels of potential exposure to residual contaminants should be considered with regard to legacy site contamination issues. A former UST remediation may have left residual volatile contaminants in the ground that are currently understood to have a potential for vapor intrusion into the building and cause indoor air contamination. Similarly, the fact of residual soil contamination may limit the ability to manage stormwater on-site through proactive measures such as groundwater recharge associated with rain gardens.

The importance of staying aware of these issues and managing them out of existence (where possible) is driven by the fact that unforeseen situations occur to varying degrees, and legacy issues can suddenly become significant sources of liability and expense. As illustrated above, it also may limit the ability to modernize on-site improvements to meet the goals of environmental site design (ESD) wherein all runoff generated by improvements is managed on-site. Many municipalities are requiring incorporation of ESD, including retrofits, to the extent practical to address the runoff issues which are only increasing with climate impacts.

Due to climate driven weather events, it is much more likely to have wind or water induced impacts to well managed systems, creating problems even under well managed conditions.

Some recent, disaster-level events have taught property managers to implement changes to minimize effects of even unlikely events. The Fukushima Daiichi disaster was the result of an earthquake promoted tsunami which inundated the nuclear power facility as well as 560-sq. kilometers of coastal area. The 14-meter (46.7-ft) wave also destroyed the emergency backup power and reactor shutdown equipment creating a reactor core meltdown and major nuclear exposure disaster that are still being brought under control today. This event taught property managers to move emergency equipment higher up and harden it against unanticipated, catastrophic events.

Super storm Sandy was a Category 3 hurricane with a 900-mile radius as it approached the coasts of New York and New Jersey but was down to tropical storm strength when it made landfall. Still this storm brought a 12.5-foot storm surge into Rockaway Beach, coastal Brooklyn and southeastern Long Island damaging or destroying 650,000 homes and buildings with an estimated $70.2 billion in damage. This storm flooded neighborhoods and emergency response systems, pushed homes off of their foundations and damaged infrastructure. Waters sloshing through these neighborhoods contained a toxic soup of sewage, heating oil, gasoline and other materials routinely stored in urban areas. Had it been a more direct hit, greater areas of storm induced erosion and surface soils scour from pounding seas and receding waters would have exposed buried materials and washed away real property all together. This storm taught property developers to harden their developments against such impacts and raise construction elevations in coastal areas even higher.

The terrorist attack of September 11, 2001 directly resulted in the deaths of approximately 3,000 people. However, the unanticipated regional air contamination and resulting exposure from the dusts generated by the buildings’ collapse have had an even greater impact on human health. The dust from this disaster could have been a little less toxic through the complete abatement of asbestos, lead based paints and older interior features. However, even so, the air impacts from such a disaster would still have been remarkable. The exposures to air pollution from this event have been found to impact birth weights for mothers pregnant at the time of the attacks, caused a range of cancers and respiratory ailments and resulted in the creation of a $2.775-billion compensation fund to help those affected.

Major disasters such as these cannot be fully accounted for in all real estate development, but the impacts of disasters like these can be lessened for affected property through proactive environmental asset management. Had the emergency generators and backup equipment at Fukushima been situated on the rooftops of buildings, the equipment would not have been flooded and the resulting melt-down could have been avoided. Tying buildings to their foundations, securing oil tanks, providing self-sealing vents and hardening hazardous materials storage and sewage processing facilities would have reduced the damage and toxic exposures from Super Storm Sandy. Complete removal of asbestos containing materials and lead based paints throughout the World Trade Center complex would have reduced the toxicity of the dusts resulting from the buildings burning and collapse.

Each of these scenarios show an improved ROI for proactive legacy issues management and mitigation. While there are limits to the type of unexpected event for which one can feasibly manage, some levels of emergency planning should be incorporated into all facility management plans. We know that, like with Super Storm Sandy, climate change is bringing stronger storms with higher winds and stronger, deluge type rain events. This increases the likelihood of a natural disaster type event affecting your real property investments. This is true of property located within extended flood plains as well as coastal areas. At minimum, a listing of all hazardous building materials in place and those materials stored in bulk on the property and their locations should be kept up to date and accessible. Facilities with larger amounts of hazardous materials on-site, or those located in locations more prone to storm or environmental impacts should also share these lists with the local emergency response and firefighting organizations. These reportings can be modeled on the requirements of the Emergency Planning and Community Right to Know Act (EPCRA).

Proactive management of legacy environmental issues will help minimize their adverse impact to the bottom line. This should include review of issues that may have been closed at the time of acquisition to verify that a new understanding has not arisen that could wake these sleeping giants. Removal of hazardous building materials as a matter of course during routine maintenance and upgrades will also help eliminate these risks. Keeping facility managers aware of legacy issues associated with a property allows their management to be factored into emergency response and modification planning for the facility. As warranted, these data should be shared with emergency first responders to prevent unnecessary exposures.