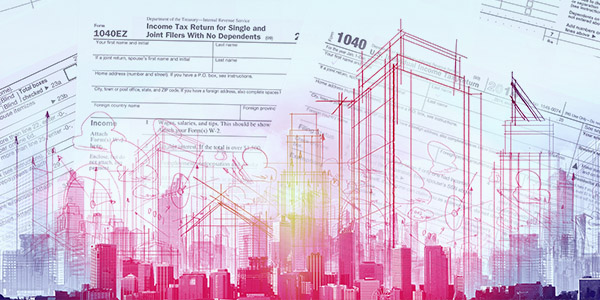 By just about any measure, the commercial real estate sector emerged fairly well from the 2017 budget reconciliation act (formerly known as the Tax Cuts and Jobs Act). Tax rates were lowered for property owners, traditional tax advantages for property taxes were largely retained if not expanded, and operating property fundamentals stand to improve.
In assessing implications for commercial real estate, we must consider both direct impacts to owners of real property as well as indirect impacts that accrue to owners via impacts of the tax law on users of those assets and on the broader economy, as discussed more fully in my report “Washington’s Holiday Gift: Implications for the New Tax Bill on Commercial Real Estate”.

Most obviously and directly, there are the reduced tax rates. Both corporate and individual income were lowered, lessening tax liabilities for all owners of commercial property going forward. In addition, the property sector has long enjoyed some special benefits including tax-free exchanges, commercial mortgage interest deductibility, and generous asset depreciation schedules. All of these provisions seemed threatened at various points over the last year, but in the end, none saw material changes in the new law.

So even if the industry was not awarded many special new benefits under the tax law, commercial real estate gained just by not losing its special privileges. The tax advantages of property income relative to other types of income — such as on so-called “carried interests” and on REIT dividends versus C corporation earnings — are largely preserved.

But the impacts of this tax law will be greater and broader than just these direct impacts. Just as building owners will enjoy lower taxes, so too will their tenants. Several business sectors will benefit disproportionately from the new tax law. These include retailing and wholesaling, sectors that traditionally incur relatively high marginal tax rates, and so benefit more from this tax reform, thus supporting more leasing.

The office sector looks to benefit the least of the major property sectors, however. Key office tenants will gain only limited to average tax savings from the new tax code. Moreover, many corporations will distribute much of their tax savings
to shareholders instead of investing in new facilities.

And finally, the multifamily sector looks to gain from tax law changes that will reduce the benefits of homeownership in many markets, and thereby raise the incentives for apartment rentals. Limits on residential mortgage interest deductions and property tax deductions, while doubling the standard deduction, will make owning at least marginally less attractive for some households in higher-tax and higher-priced markets, to the benefit of local apartment markets.

Perhaps the primary impact for the real estate sector may well be through improved property fundamentals. The tax cut is likely to foster at least somewhat stronger economic and job growth this year, fueling accelerated leasing.

Still, most economists expect the boost to be both modest and short-lived as the economy is already operating at close to full capacity, so the stimulus may be more inflationary than expansionary. Plus, the tax cuts are disproportionately weighted to businesses over consumers, and to upper-income households over those less affluent, doubly blunting the impact relative to a more broad-based consumer tax cut.

Moreover, interest rates will likely rise faster after the tax cut due to the greater national debt and more aggressive Fed rate hikes. Such increases would not only lower returns on interest-sensitive investments (like REITs) and raise debt-funded acquisition costs, but would also start to slow economic growth and thus leasing, likely in late 2019 or 2020.

Impacts on real estate capital markets are less clear. Uncertainty as to the timing and nature of the tax reform likely kept some capital on the sidelines this year, so enactment of the tax act could encourage more transactions now that the uncertainty has been lifted. However, the act does not confer any new significant benefits specifically to real estate owners, and early signs do not point to any meaningful pickup in transactions so far this year.

In sum, this new tax reform seems generally favorable for commercial real estate, though not an especially generous gift to the sector. But a more complete assessment must await the weight of market evidence — and the creative scrutiny of talented tax accountants. •