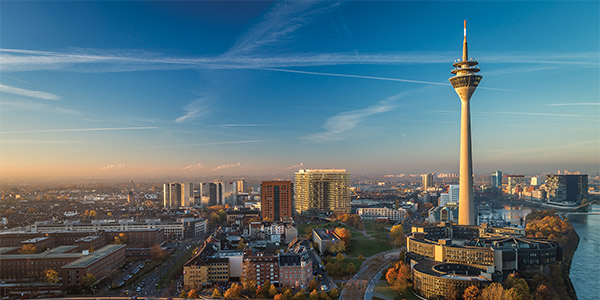 The business climate in Europe is still on a high level and proves to be resilient in an environment characterised by high political uncertainty. The economic conditions for commercial property investment markets remained robust during 2017. On the European office investment market, yield compression is still ongoing. In Q4 2017, the European prime yield amounted to approximately 3.99% (-17 bps YoY), clearly below the last low in Q2 2007 (4.31%). The strongest yield compressions from 2016 to 2017 have been observed in Dusseldorf (-30 bps), Hamburg (-20 bps), Berlin (-10 bps), The Hague (-20 bps) and Utrecht (-15 bps). Looking at the full year, €120.7 billion have been invested in office properties in EMEA, making 2017 an absolute record year (+14.9% YoY). Likewise, EMEA office take-up has been peaking with 13.7 million square metres in 2017, 23.0% above the 10-year average.

The same case holds true for the German market. In an environment still characterised by high levels of uncertainty, investors continue to perceive Germany as a safe haven. This results in a strong demand for German real estate. In combination with scarcity of suitable investment product, the situation in Germany is even more difficult for investors. Not surprisingly, 3 of the top 5 strongest yield compressions in Europe have been observed within the German market. From our experience as an investment broker, we at JLL personally can observe strong excess in demand, with deals being oversubscribed multiple times.

In the search for yield and real estate exposure, investors are facing supply shortage and increased prices. One observable investment strategy to mitigate the situation in Germany is ABBA. This strategy is described by investments in A-locations but (secondary) B-properties and B-locations but (prime) A-properties.

In 2013, the proportion of office transaction volume into prime and secondary locations within the German Big 7 markets had been equally distributed. Since 2013, the transaction volume in secondary B-locations increased steadily by 14 percentage points from 2013 till 2016. In 2017, a decline has been observed for the first time since 2013 (-11%) and investments in prime locations were back on the rise again (+20%). It remains to be seen whether this reversal of the trend is going to continue in 2018. 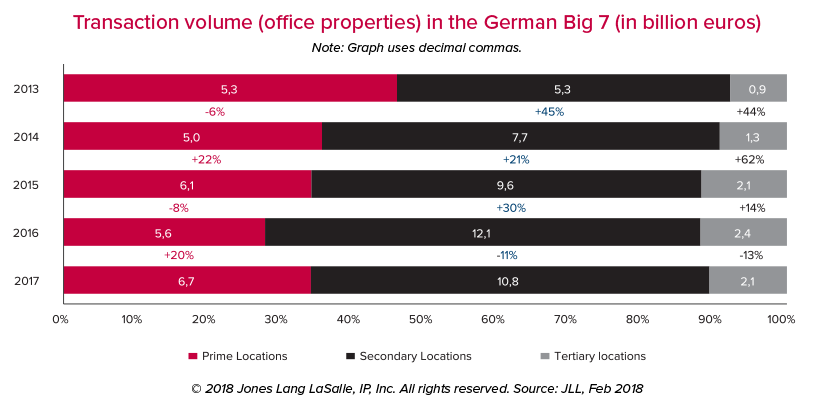 If a potential reversal of the trend, which in terms of transaction volume began to show in 2017, will materialize in 2018, remains to be seen. Generally, forecasts still predict a small potential for decelerated yield compression in the majority of the EMEA and German office markets. In secondary submarkets this potential could be more prevalent, which could in turn lead to ongoing strong activity in this segment of the market. •