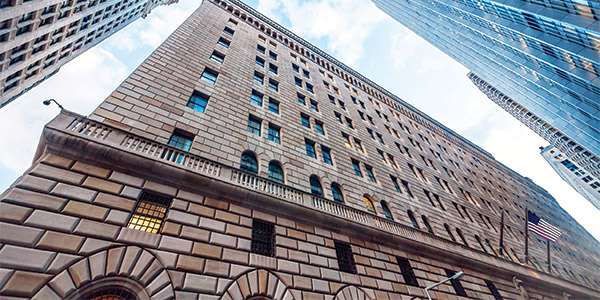 Yogi Berra had a fortuitous quote for virtually every baseball situation – and most still apply to so many life and business situations. Yankees No. 8 drew on perspective from his service during World War II in the Navy (1943-1946), his epic performance as a star Yankees player in the mid-1940s through the early 1960s, and later as a championship-winning coach into the 1970s. Yogi Berra played or coached in a record 22 World Series. His infamous quote, “It’s like déjà vu all over again”, was in reference to when he witnessed Mickey Mantle and Roger Maris repeatedly hitting back-to-back home runs in the Yankees’ seasons in the early 1960s. Today, the quote is as valid regarding the state of real estate finance as it was then to baseball. I think he might offer it up today in response to a question regarding his thoughts on the FED raising interest rates. I use this historical reference to queue up a discussion on commercial real estate finance to draw out some personal perspectives on this topic having held a front-row seat at the Federal Reserve before and during the Financial Crisis.

Between 2005 and 2010, I served within the Federal Reserve System – first as the Atlanta Federal District Bank’s real estate subject matter expert (2005-2007), and later as the Commercial Real Estate Risk Specialty Officer at the New York Federal Reserve District Bank (2008-2010) during the heart of the Financial Crisis. I mention this because having a front-row seat engaged with Chairman Bernanke and the respective FED Presidents during the most disruptive economic and real estate finance event since the 1930s provides one with a unique perspective to assess where we are today and speculate on where we are headed. YES, I am in the camp that a major commercial real estate disruption is more likely in 2019 and 2020 than not; but NO, I do not see a repeat of a disruption as severe as 2008-2009.

The Good, The Bad – and Let’s Hope Not – The Ugly Again

Let’s start off with some perspective on where real estate has come and then explore the historic risks that are re-emerging that threaten the calm real estate finance waters we have been enjoying in 2017 and 2018. Commercial real estate finance has come a long way since 1955 when the total debt capital invested in it was a mere $250 billion.1 The total amounts of commercial and multifamily debt outstanding through the first half of 2018 were $4.1 trillion (inclusive of construction loans according to REIS Capital Markets and Federal Reserve data) and $3.2 trillion (excluding the $900 billion in bank construction loans included in the REIS tally and the figure quoted by the Mortgage Bankers Association). 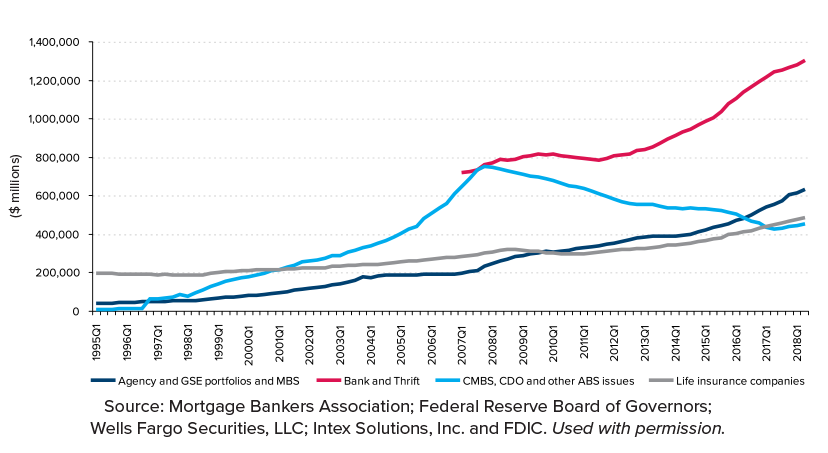 Risk number one is that commercial real estate concentration matters when things go dry in real estate finance – like they did in 2009 and 1981.

If one portion of the capital pipeline clogs, a backup occurs disrupting all commercial real estate finance. What kind of future clog? A disruption in permanent debt markets from implementation of FASB “Lease Accounting” at the end of 2019 could result in major real estate tenants like Amazon, Wal-Mart, national banks, national restaurant or drug store chains, Fortune 500 companies, etc. pulling back from long-term lease structures disrupting the NNN lease market and attractiveness of office, retail and industrial buildings with shorter duration leases (5-year lease terms versus the current 10-20 year duration structures).

So which capital source will be most impacted? It’s the banks, again. Why? If bank construction loans become 100% loan-to-value because of higher construction costs or higher cap rates, who will refinance these loans? Not life insurance companies or CMBS without more equity in the loan. Developers will end up having to renegotiate these loans and more commercial real estate debt will back up in the banks.

Then, the bank regulators will panic with commercial real estate concentration levels of 60 percent or more and declining values from a reset of cap rates due to both a higher interest rate environment and less valuable lease structures. Figure 2 shows MBA data at mid-2018 and Figure 3 shows the total commercial real estate debt pie from REIS heading into the second half of 2018.

This commercial real estate concentration concern/risk becomes amplified in the second half of 2018 and 2019 when one considers the contraction in banks since 1990. In both the 1980-1988 period and the 2009-2015 period, the FDIC closed approximately 500 financial institutions during each contractionary period – which were then followed by a wave of financial institution consolidations that have resulted in the number of U.S. regulated financial institutions declining by more than two-thirds over the past three decades (from more than 16,000 in 1990 to 10,000 in 2000 and just 5,500 at mid-2018).3 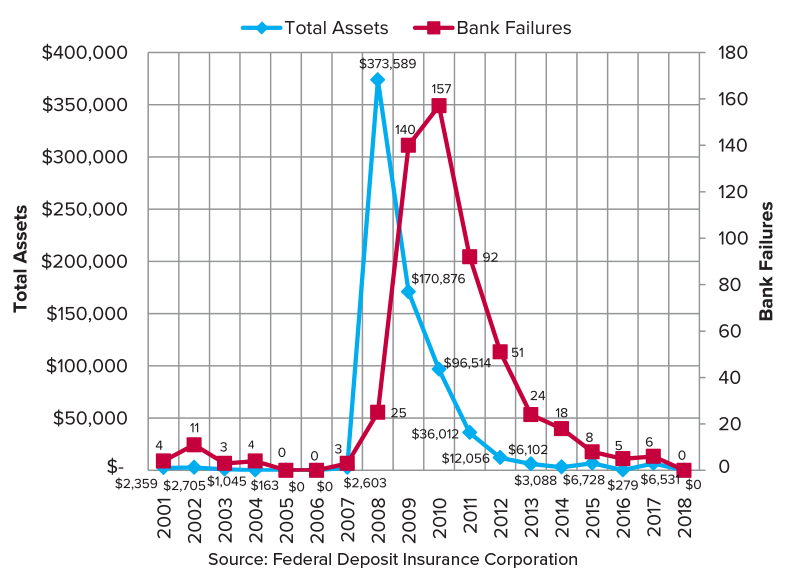 Commercial real estate concentration risk has not been solved by the Federal Reserve, through its enhanced supervisory authority or bank stress tests; Congress, via Dodd-Frank legislation; nor the real estate lending market modifying behavior after 500 bank failures (2009-2017).

Risk number two is that real estate is not immune from business cycles, economic recessions, or disruptive “Black Swan” events – such as interest rate spikes, a trade war, currency crisis, or cyber terrorism. Since the mid-1800s, the United States has weathered nearly three dozen recessions as defined by the National Bureau of Economic Research (NBER). As Figure 5 from the St. Louis Federal Reserve Bank’s FRED website shows, these recessions have become less frequent but more severe in nature. This observation is quite evident over the decades since 1980. And the adverse impact from these less-frequent-but-more-severe economic disruptions has resulted in more severe commercial real estate finance disruptions and value volatility. The S&L crisis of the late 1980s and most recent 2008-2009 Global Financial Crisis are cases in point.

Figure 5: NBER based Recession Indicators for the United States from the Period following the Peak through the Trough (USREC)

If the current economic expansion continues beyond Q2 2019, it will be the first time since 1857 that the United States did not experience a recession in a decade. History is against the odds.

National Bureau of Economic Research (NBER): The U.S. has experienced 33 recessions since 1857. On average, a recession occurs every 4.9 years and lasts 17.5 months. And, there has been at least one recession in every decade.

A look back at prior commercial real estate finance disruptions from the past 5 decades reveals an important observation that is lost due to complacency in the market today. That observation is that:

Commercial real estate finance disruption may look like prior ones when graphed, but each occurrence has very different root causes and outcomes.

In the 1980s, the 1986 tax law change triggered the disruption of a critical commercial real estate finance source, savings and loans. And leading into the housing and financial crisis of 2007-2009, the Federal Reserve raised interest rates 16 times between Q1 2004 and Q2 2006 pushing the 10-Year Treasury rate back to 5.0 percent. We all know what followed.

Interest rates matter, and the Federal Reserve has been raising interest rates directly for two years – and indirectly by means of selling down its $4.2 trillion balance sheet accumulated during the Global Financial Crisis. From just an interest rate perspective, commercial real estate finance faces a headwind in the second half of 2018 and 2019.

Risk number three is that the market is complacent. Once again, the commercial real estate finance industry is ascribing to a mindset that the trends and patterns we observe in 2018 – such as a 3.0 percent GDP, sub 4.0 percent unemployment rate and sub 3.0 percent 10-Year Treasury yield – will continue into 2019 and 2020.

The market is not prepared for the effects of a 3.5 percent — let alone 4.0 or even 5.0 percent — 10-Year Treasury and what that would mean to cap rates and commercial property valuations.

Memory is short. Between Q1 2004 and Q2 2006, the Federal Reserve raised interest rates 16 times before the onset of the Financial Crisis a full 18 months later. Properties purchased in the first half of 2018 assuming a 2.75 percent 10-Year Treasury could justify a sub-6.0 percent cap rate, but properties purchased in 2019 with a 3.5 percent to 4.0 percent 10-Year Treasury rate environment will not be able to justify a price based on anything below a 7.0 percent cap rate.

Commercial Real Estate is NOT Immune from Disruption

Next up on the list of “what could go wrong are: i) rising interest rates and unwinding of the QE (Quantitative Easing) experiment; ii) emerging currency crises (already surfacing in Italy, Turkey, and Argentina); iii) tariffs and trade wars (like those burgeoning with China and European/NATO allies); iv) over-leveraging assuming continuation of sub 6 percent cap rates and a 10-Year Treasury below 3.0 percent; v) changes to tax code following the November mid-term elections.

All the aforementioned triggers have been present in prior disruptions. Is history about to repeat itself and is a commercial real estate finance disruption likely in the 2019-2020 period? The answer is yes. The probability of a disruption in the next 6-18 months is as elevated as it was for much different reasons pre-2007-2008. As you look forward, keep in focus that the next commercial real estate finance disruption will be for different reasons. •