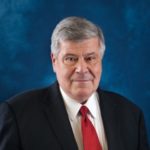 Mike Couch is a native of Milledgeville Georgia and attended Georgia Military College, Georgia College & State University and Georgia State University. Commissioned as an U.S. Army Officer in 1973, Mike served as a Field Artillery Officer throughout the world and retired from active duty in 1994.

He and his wife Sherri Malone made their home in Indianapolis Indiana where Mike was involved in the BRAC 91 (Base Realignment & Closure) Closure of Fort Benjamin Harrison as a member of the Fort Harrison Redevelopment Authority and was an integral part of the development team that resulted in the Fort Harrison project being the Department of Defense BRAC Project of the year in 1997. The overall effect of the project was replacing 9,000 Department of Defense jobs with over 15,000 new public and private sector jobs and the birth of the new city center of Lawrence.

Mike accepted the position in Milledgeville in April of 2010 and focused on developing a process and strategy for repurposing the sprawling Central State Hospital Campus. House Bill 815 was passed in the 2012 Georgia Legislative Session and the Central State Hospital Development Authority was established in July, 2012. In the last three Legislative Sessions House Bill 495, Senate Resolution 788 and Senate Resolution 228 passed and were signed by the Governor of Georgia for the repurposing of the sprawling CSH Campus .The legal mechanisms are now in place to truly redevelop the Central State Hospital Campus. These legislative tools have significantly accelerated the development and transition of the real estate. The last year has seen the first significant projects being completed which will result in almost 500 new jobs and over $84 million in development and construction investment.

Mike now serves as the Executive Director of the authority with offices in the historic Powell building on the CSH Campus. He is also a member of the Georgia Military College Foundation Executive Committee, Central Georgia Technical College Board of Directors and is past president of the Old Capital Museum Board of Directors.

Mike is married to Sherri Malone they are the proud parents of three children and very proud of their grandchildren, Stella and Micah.