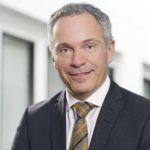 A recipient of a fellowship in the Young Leaders Program of the U.S. State Department, Stéphane Paquet has a Graduate Diploma in World Politics from the London School of Economics and Political Science and a Master’s degree in Communication from Université du Québec à Montréal. Mr. Paquet was also a lecturer at Université de Montréal and the University of Regina.

From 1991 to 2001, he worked as a reporter, copy editor and assignment editor for broadcasting company Radio-Canada in the Maritimes, Regina and Montréal. He then switched to print, working at first for the daily Le Soleil in Québec City and then La Presse in Montréal. While at La Presse, he was in charge of the newspaper’s Business section for two years and also coordinated the internship program for young journalists. Over the years, he specialized in business journalism and became joint publisher and Editor in Chief of Les Affaires Group in September 2010. As such, he was in charge of the Les Affaires newspaper, A+ personal finance magazine and LesAffaires.com website in addition to actively participating in strategic discussions concerning the entire Group.

After two decades in the world of media, including 10 years as a manager, Mr. Paquet was appointed Québec Delegate General in London. From December 2012 to December 2014, he focused on enhancing economic trade between Québec and the United Kingdom. Québec’s exports to the United Kingdom increased by 67% from 2013 to 2014 as a result.

After sharing his expertise at Finance Montréal and coordinating a work group dealing with the low number of Québec companies listed on the stock market, Mr. Paquet was appointed Vice-President, Investment Greater Montréal, in 2016.
Mr. Paquet and his partner are fathers of two children.