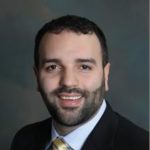 Patrick McCrory transitioned into the Vice President & Chief Commercial Officer role at Palmetto Railways in 2015, where he is responsible for all sales & marketing, business development, strategic planning and intermodal development for the organization.  Upon being hired at Palmetto Railways in February 2013, Patrick assumed the role of Vice President and Chief Operating Officer.  Prior to being employed by Palmetto Railways, Patrick held the positions of Terminal Superintendent, Atlanta/Charlotte and Terminal Manager, Northwest Ohio at CSX Intermodal Terminals, Inc.

Patrick began his career in marine terminals and longshoring with APM Terminals in 2005 serving in a number of management positions including operations, training, safety and human resources throughout the APM Terminals North American network.  Transitioning into the railroad industry in 2010, Patrick was a member of the team responsible for the operational start-up of CSX’s Northwest Ohio Intermodal Transshipment Hub where he carried a specific focus on lift equipment commissioning & training and terminal operating & automation systems operational integration.

Patrick is a graduate of the United States Merchant Marine Academy in Kings Point, New York where he obtained a Bachelors of Science degree in Logistics and Intermodal Transportation.