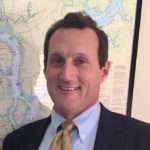 As Executive Director of the Charleston Branch Pilots, Captain Cameron directs harbor pilot operations serving all trade through the Port of Charleston, and manages government and industry affairs.

As an independent consultant, he offers expert admiralty witness testimony, and serves as a maritime advisor to public and private entities throughout the State, including the South Carolina Savannah River Maritime Commission.

Captain Cameron’s 23-year Coast Guard career focused on port security, cargo ship safety compliance, and marine environmental protection, and included shipboard duty as both engineering and deck watch officer.  Notable assignments were Chief of Marine Safety for the Port of New York, and, during the Iran-Iraq War, lead inspector for the Kuwaiti National Oil Tanker Fleet.  On 9/11 and throughout the recovery, he was assigned to the New York City Mayor’s staff to coordinate port security and marine operations.  His final tour, from 2004-2007, was as Sector Commander and Captain of the Port, Charleston, where he led all Coast Guard operations throughout South Carolina and Georgia, after which he chose to retire so his family could permanently settle in Charleston.

Captain Cameron is appointed by the Governor to the South Carolina Emergency Response Commission, and by Senator Lindsay Graham to his Homeland Security Coalition.  He is a recent member of the Executive Board of the American Salvage Association, and locally, he is President of the Propeller Club of Charleston.