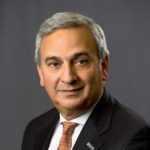 Jim Newsome is the President and CEO of the South Carolina Ports Authority in Charleston, SC.  He assumed that role on September 1, 2009 and is only the fifth leader in the history of the port. He is also currently the longest serving leader of a major container port in the United States with eight years in his position.

Prior to his current position, Mr. Newsome had an extensive career in the ocean container shipping industry as below:

He was the first American to assume the top roles in the United States for both Hapag-Lloyd and Nedlloyd Lines.

Mr. Newsome has received several other awards and honors:

He is involved in numerous organizations:

Mr. Newsome is a native of Savannah, GA, where his father was an executive with the Georgia Ports Authority.   He has been married for 32 years (wife Kathy) and has two children and one grandchild.  His daughter, Rachel (30), is a counselor in Nashville, TN, married to Jason Smith, who is getting his PhD in theology at Vanderbilt University (both University of Georgia undergrads).  They are the proud parents of Amelia Rose Smith, born May 4, 2016.  His son, Matt (26), is a fourth-year medical student at the Medical University of South Carolina in Charleston (undergrad at UNC Chapel Hill) and is currently applying for a residency in urology at several hospitals.