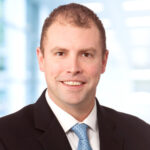 Jay Rourke serves as a Senior Project Manager for NB Development Group and General Manager for both NB Fitness Club and Warrior Ice Arena. Jay has an integral role in all development planning and permitting, plus he oversees all sports and fitness real estate assets of Boston Landing.

Jay served as a Senior Project Manager with the Boston Redevelopment Authority from 2005 to 2011 where his career covered planning, permitting and development. While at the BRA, Jay facilitated the permitting of more than 12 million square feet of development throughout Boston. From 1998 to 2005, Jay served as an aide to Mayor Thomas M. Menino.

Jay received a Bachelors degree from St. Michael’s College, Vermont where he played varsity hockey and lacrosse. He serves on the board of the Veronica Smith Senior Center and Hyde Park Youth Hockey.