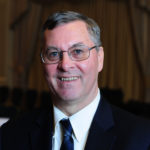 Hugh Kelly serves as Special Advisor at Fordham University, where he is helping design and launch a new Masters of Science in Real Estate graduate program. From 1984 through 20016, he taught at New York University, including graduate courses in real estate economics, market study, portfolio investment risk, and urban economic development.

Since 2001, he has headed his own consulting practice, Hugh F. Kelly Real Estate Economics, which serves national and international real estate investment and services firms, governmental organizations, law firms, and not‐for‐profit agencies. Prior to establishing this consultancy, he was chief economist for Landauer Associates, where he worked for 22 years.

He is a member of the Counselors of Real Estate and served as its elected Chair of the Board in 2014. He has spoken to virtually every major real estate organization in the United States, as well as to audiences in Canada, the U.K., France, the Netherlands, and Germany.

The author of more than 300 articles in industry journals, Kelly has also published a paper on contemporary politics and economics titled “Judgment: Imagination, Creativity, and Delusion” in the philosophical journal Existenz.   Other notable memberships include the National Association of Business Economists, the Urban Land Institute, the Homer Hoyt Advanced Studies Institute, and the American Philosophical Association.

Kelly served as Board President (2006-2012) for the Brooklyn Catholic Charities’ Affordable Housing Development Corporation, which manages 3,000 units of housing for low‐income families, seniors, and special needs residents. He is presently a board member for corporations holding and managing the assets of the Catholic Diocese of Brooklyn and Queens which are not now in religious use.

Kelly earned his B.A. from Cathedral College (New York) and his Ph.D. at the University of Ulster, (Belfast, Northern Ireland). His dissertation focused on “24‐hour cities and commercial real estate investment performance.”

Hugh Kelly has been the featured speaker at numerous national conferences of real estate and related industry associations, as well as conferences on World Cities at the United Nations and Harvard University. He has published in both academic and real estate industry journals since 1983. Over the past few years he has spoken at events in New York, Boston, Miami, New Orleans, Salt Lake City, Seattle, Dallas, Memphis, New Haven, and Hartford in the US; Paris, Strasbourg, and Cannes (France);  as well as Belfast, Istanbul and Athens elsewhere in Europe. His speech in Athens has been published in Real Estate Issues. Hugh is also lead researcher and co-author of Emerging Trends in Real Estate 2015, 2016, and 2017, and the forthcoming 2017 edition of Emerging Trends. His columns on economics and real estate appear regularly in Commercial Property Executive.