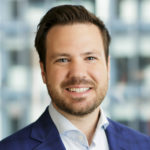 Mr. J.P. Towner has been the Chief Financial Officer and Executive Vice President of Pomerleau Inc. since August 2016.

He was involved in high profile transactions such as the $400 million University of Montreal Hospital Center Phase 2 where he led Pomerleau’s bid strategy, commercial structuring and financing solution. This was the first such contract transfer in the world for a multi billion dollar project delivered as a PPP. Mr. Towner was also involved on the negotiation and financial structuring of the $5 billion Montreal LRT project and the $160 million Baie Saint-Paul hospital, among others.

As part of his executive role, he also manages the firm’s global partnerships with co-investors, lenders, bonding companies and insurance providers.

In addition to his responsibilities as Chief Financial Officer of Pomerleau, he is a director of Borea, a renewable energy construction company in Canada; and is a director of the Montreal Heart Institute. Foundation and Quebec MBA Association.

He is a graduate from Harvard Business School’s General Management Program. He also obtained his Bachelor in Commerce with a Major in Accounting from Laval University.