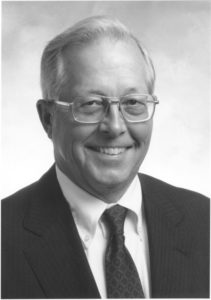 Eugene (Gene) Carver, CRE Emeritus, who served as President of The Counselors organization in 1991, passed away in Los Angeles on February 4, 2018.

He had a distinguished career, founded on a Dartmouth College education and a subsequent position managing logging operations at a Canadian sawmill. He moved to Western Mortgage Corporation in San Francisco, rising to Vice President, and in 1969 he became President of Hoffman Associates, Inc., a privately-owned asset management and real estate counseling firm. He assisted BankAmerica Corporation in forming BankAmerica Realty Investors and became Chairman of the REIT. He was very active in civic matters, and held several board of director positions. He was invited to CRE membership in 1974.

In 1997, Mr. Carver received The Counselors’ most prestigious honor, The Landauer/White Award, which celebrates outstanding professionalism as well as the honoree’s notable contributions to community and the greater good. His service to The Counselors was extensive; he chaired the Executive, Finance, Invitation, Nominating, Ethics, High Level, and Convention Committees, and served on the CRE Board of Directors.

He was known to synthesize complex concepts to provide succinct explanations of difficult issues. In a letter to CRE members, Mary Fleischmann, President and Chief Executive Officer of The Counselors, said, “It is difficult to think of a person who more clearly epitomized the fundamental values of The Counselors of Real Estate or lived them with more conviction and reverence. He was a statesman in every sense of the word. His was the voice of reason, the voice of veracity, the voice of consistency, the voice of calm. It was his opinion that we sought in good times and bad, and although some might not have agreed with him all of the time, I am hard pressed to remember such an occasion. There was an innate wisdom in Gene Carver – a common sense that transcended the latest trend or flavor of the month. He had a way of bringing us to our senses…we trusted him. Gene loved a good laugh, and a Cole Porter tune – the lyrics of which he could recite on cue. He was a leader in the Ballroom as well as the Board Room. His smile was contagious: wide and frequent, enveloping his entire face….. and ours.”