How interests in real estate partnerships are valued can result in significant savings for gift or estate tax returns. According to a new IRS ruling, Revenue Ruling 93-12, the percentage of ownership should be considered in determining value. Significant discounts can be taken because of a lack of control. This is particularly true if the interest to be valued is not a controlling interest.

Traditionally, partnership interests in real estate were valued by a simple and straightforward method. A property (or a number of properties) was appraised as if it was sold on the date of trans­fer or death. If the property was appraised at $5 million and the estate had a 10% interest, then the value for estate tax purposes was $500,000. Federal and state estate tax returns were prepared on that basis. This method was applied even if the property was not being sold immediately or if the deceased had no control over the property.

The same technique has been traditionally used for holdings in a private real estate fund or partner­ship. For instance, if management of the fund val­ued the net assets at $100,000 per unit and the estate owned 5 units, the interest in the fund or partnership was valued at $500,000 for estate tax purposes.

The problem with both these valuations is that the estate’s interest in the two examples could not be sold for $500,000, since a ready market does not exist for units in private partnerships or in minority, non-controlling interests in specific properties.

The IRS, in Revenue Ruling 93-12, now appears to understand this dilemma. The ruling recognizes the need for considering minority interest discounts in the transfer of closely held stock of a corporation with respect to gift tax valuation. Acting as repre­sentatives, we have seen the same reasoning ap­plied to appraisals of interests in real estate partnerships. It also has been accepted by the IRS with respect to estate tax returns.

A major difference in valuing a non controlling interest in real estate versus a controlling one, is that the building probably will not be sold in the near future. Frequently there is a low tax basis. The low tax basis means that a significant part of the proceeds of any sale above the existing mortgage balance would be subject to income tax and the tax payable may well exceed the cash realized from the sale. This often occurs when a previously refi­nanced property is sold. Such a situation eliminates much of the incentive for the remaining partners to sell. This is particularly true for many older family real estate partnerships and may well be true for properties controlled by the new up-REITS which have become so popular during the last 12 months.

There are two other factors to consider, partic­ularly for portfolios comprised of older properties: (1) the buildings may have non conforming uses because of zoning changes, and (2) there may be a significant need for capital improvements to make the buildings salable in today’s market. These fac­tors need to be considered when selecting capitaliz­ation rates for the net operating income to arrive at a reasonable gross value for the entire property. From that amount discounts are applied for a mi­nority interest and for any needed capital improvements.

Therefore, in valuing non controlling interests, we have used discount rates of 10% to 25% of the cash flow, depending on the quality of the real es­tate involved. ro determine current value, we have assumed that none of the properties in the portfolio would be sold for 10 years and we have deducted the cost for needed capital improvements.

Once the property and/or portfolio is valued, an additional discount of 25%-35% was taken due to the ownership of a minority interest. This discount was applied knowing that a market does not exist for non controlling partnership interests. Publicly­traded partnership interests and other partnerships generally trade for a discount of at least 25% to 50% of a pro rata value of the net assets, and this pro­vides a comparable value example.

The impact of these discounts are shown in Ta­bles 1, 2 and 3 which indicate valuation based on capitalizing first year cash flow, discounting cash flow after deductions for capital expenses and arriv­ing at valuation based on a minority interest. As shown in Tables 1, 2 and 3, the impact of these discounts is to reduce the value of portfolio interest which might be valued initially at $47,000 to $32,000. This methodology has resulted in consid­erable tax savings for estates. 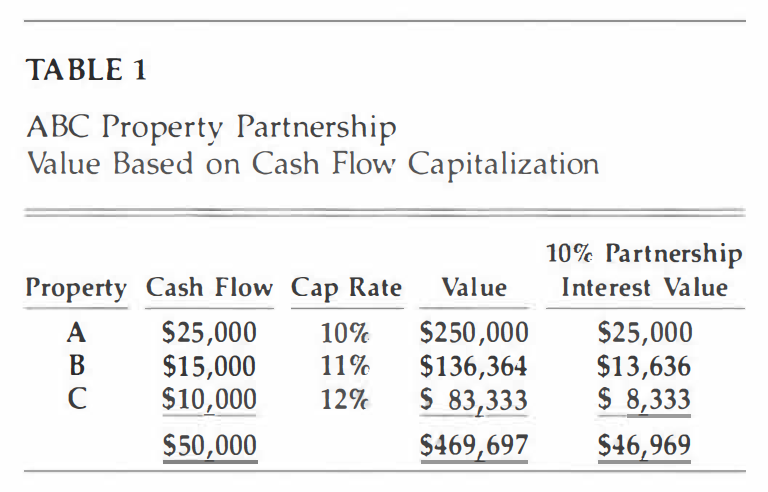 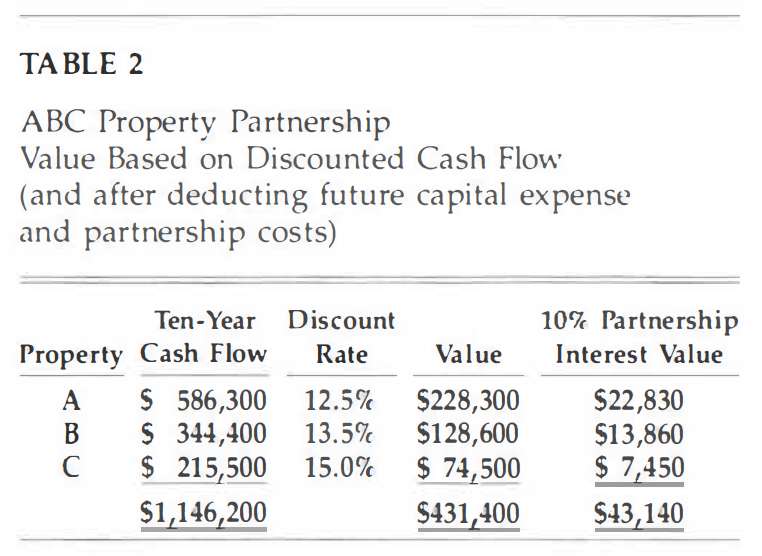 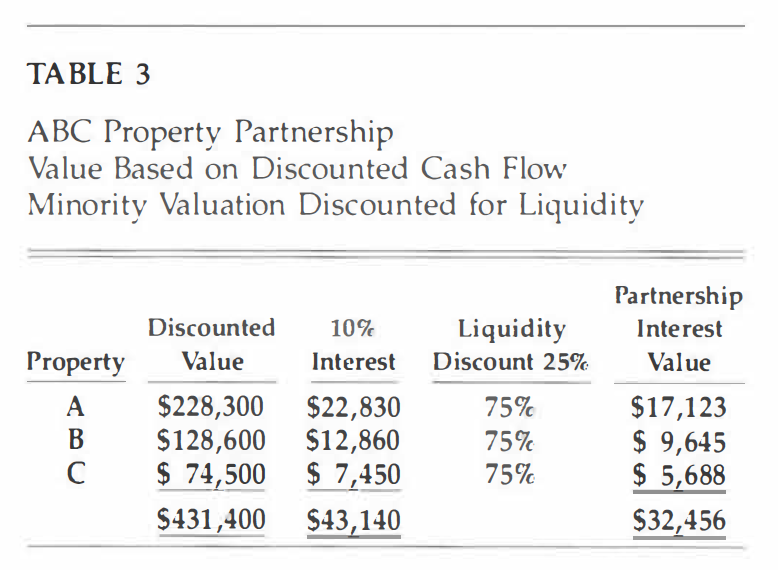 Such discounts are defensible because a pur­chaser of a partnership minority interest has no control over the underlying assets. This is partic­ularly true for closely held family partnerships. It is very difficult to sell partial interests to non family members even with deep discounts . Experience teaches that most third party investors have no in­terest in buying into such situations at any price.

The IRS has recognized some of these con­straints on value in Ruling 93-12. The constraints on value are based on an IRS policy reversal which makes available a discount for a non marketable minority interest in a corporation that owns real estate even when the majority interest is owned by other family members. Discounts have been ac­cepted by the IRS due to the non marketable and illiquid nature of the minority interest being val­ued. Such discounts represent a reversal of a long­standing IRS policy which has been frequently liti­gated with taxpayers who believed otherwise. These cases were received by the courts with mixed results, with the taxpayer or the IRS favored on this issue.

However, Revenue Ruling 93-12 does not ad­dress many other issues which can materially affect valuation of a minority interest. For example, a swing vote control premium may exist in certain cases. In a swing vote, an individual partner’s vote may decide which group of partners is the majority under a majority control partnership agreement. Othertimes, local law fiduciary duties owed by the majority to the minority may exist under certain state laws, and the valuation of a minority interest may increase when there is a creeping control pur­chase program in effect by certain other owners who want to obtain control of the partnership so it will take certain actions. Lastly, the valuation of a minority interest when ownership by three part­ners is other than one-third each (the limited fac­tual case covered by Revenue Ruling 93-12), may be viewed differently by the courts. Many factors can affect the valuation and professional analysis and advice is essential.