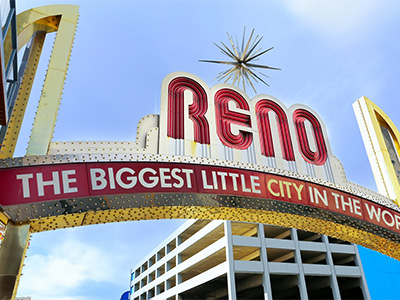 Resiliency and sustainability are keys to creating smart cities for the 21st century and beyond.

Creating a collaborative environment among all stakeholders, the Developers, Architects, Engineers, City Officials and Staff, as well as the community at large, is the key to success with such a large, complex project.

The panel uses Reno, Nevada as the example of a city in the midst of reinvention. Each member of the panel, including the moderator, are part of a team that has designed a $1.2 billion project for a seven-block portion of the city center that they believe will be a model of resiliency and sustainability that other cities will be challenged to emulate. This approach to planning, infrastructure development, conservation and municipal collaboration is unique.

During boom times in Reno, beautiful suburban homes and shopping centers flowed south, north and northwest, but large sections of downtown remained blighted. The 2008 recession hit Reno as hard as anywhere in the country. About 10 years ago, Don Clark, an architect and developer, began strategic planning for an area just west of Virginia Street, the main north/south axis through Reno, called “West 2nd District.” Project planning took a hiatus until one and a half years ago when it began again in earnest.

Clark knew the approach to getting such a massive project accepted, funded and developed had to be different. The few endeavors that were attempted in post-recession times did not come to fruition, leaving the city, which had committed to tax increment financing redevelopment bonds, deeper in debt and development-shy. But better times and an aggressive economic development effort in Northern Nevada has attracted many new employers to the community. This has diversified the economy and promises 55,000 new jobs over the next five years.

The area of this ambitious development, which has a six- to seven-year build-out horizon, is ideal for redevelopment. It is adjacent to the casino and entertainment core down to the Truckee River and the desirable Riverwalk district. In addition to proximity to the University of Nevada at Reno and I-80 corridor, the property is close to the best public high school in the Washoe County School District. Saint Mary’s Medical Center is three blocks north. A relatively new Triple-A ballpark is six blocks east. Today, the redevelopment area is characterized by vacant and blighted properties and run-down weekly motels, a throw-back to the days when Nevada was known as a quickie divorce state, the only requirement being six-weeks residency. As a private development, the group has acquired the majority of the property.

Because of Reno’s history and financial situation, the conventional method of using tax-increment financing (TIF) to bond against future tax revenues to put in infrastructure and acquire land is not available. As Clark considered the project, the idea of utilizing TIF funds was virtually impossible because of the city’s current debt load. Instead, the development group and partners are investing in the infrastructure upfront, taking on the risk and realizing reimbursement only when the project generates actual increased tax increments. Because it’s a blighted area, the district qualifies for some New Market Tax Credits as well.

“As you do an urban project, there is incredible complexity,” Clark said. “We are embracing the complexity. Our confidence in the vision, the strength and diversity in Reno’s new economy, and the collaboration with the city, convince us we will be recover our investment down the road. We are also working with the city to shape the expenditure of the tax increment beyond our needs toward investments that raise the value of the surrounding community.”

Clark described the project as a “totally different animal than normal development, as we construct this mixed-use area that will support 2,000 new residential units, 450,000 square feet of new office space, 350,000 square feet of retail space and two hotels. Many of the structures incorporate a mix of uses vertically — not just horizontally — with retail at street level, often with office for a few floors, then residential above. This has required innovative approaches to the ownership and governance of these complex buildings.”

“We’re not designing an isolated enclave, but rather carefully linking the district with the rest of the city,” Clark said. “We’re focused on creating enough density to make the economics work well, but not oversaturating the land. We’re incorporating public spaces that are pleasant and enhance the quality of life for people who live, work, visit and shop in this dense area to make it an attractive destination for people throughout Reno.”

From the beginning, the group has worked with service providers, first responders and other agencies to develop a plan for relocating the 200 to 300 residents and transients living in weekly motels and blighted buildings that will be torn down.

As Clark explains, “It’s not a heavy lift financially for us, and it’s the right thing to do. But it changes the political environment at the same time it changes the social infrastructure. Traditionally, developers tend to focus only on what they’re doing and not understanding what it rubs up against. That tends to create isolation, preventing the creation of a high-functioning community. Opportunities are lost.”

“We’re dedicated to looking at the broader infrastructure outside of our boundaries and how it affects the people on the periphery,” he said. “In addition to the City of Reno, we see residents, the labor unions, the school district, the university, the economic development people, NV Energy and our state legislators as stakeholders. We treat them as partners.”

“As it relates to communications, security and safety, we know our systems will go through a refresh about every five years,” Clark said. “All of these technologies will have a next generation before we’re done building. We and our partners are designing infrastructure for the future, cognizant of the fact that energy, data, security and water technology, for example, will evolve and become more efficient. We’re not trying to solve the finish line; we’re creating a context that allows the district to continually grow.”

Among the key partners on the project is Miyamoto International, an earthquake and structural engineering firm that operates worldwide and has been on the ground immediately after major earthquakes in Haiti, Nepal, China, New Zealand and Ecuador, among other locales. Its CEO, Dr. H. Kit Miyamoto, espouses the philosophy: “We don’t build one-earthquake buildings; we build buildings that will remain in operation after a major seismic event.”

Miyamoto explained that Reno is in a high-seismic zone — the equivalent of San Francisco or Los Angeles. He said the Reno project is taking the long view as it pertains to resilience and sustainability.

“While developers need a return on investment, they know that investing in preventing possible business interruption pays for itself in the long-run,” Miyamoto said. “Building codes are meant to save lives. They’re doing a good job of that, but our goal is to save buildings as well — making them resilient and functional the day after a major seismic event.”

With Reno in a high-risk seismic zone, Miyamoto is working with the city to utilize performance-based design in seismic engineering that goes beyond code, including diagonal shock absorbers that disperse seismic energy, a technique used by NASA for more than 40 years.

“Performance design does not have to cost more and, in fact, will result in net less cost overall,” Clark said. “We’re raising the bar in design as an economic model. There may be a little more cost up front, but this approach will reduce costs in other areas in the long run. It’s a very different mindset than most development that’s focused on cutting costs everywhere.”

Glumac, a sustainable mechanical, electrical, plumbing and infrastructure firm on the West Coast, is designing the building systems for the massive project. Steven Straus of Glumac said it is possible to have an urban eco district that actually generates more energy than it uses and consumes more waste than it produces.

“That’s the future of where developments need to go,” Straus contends. “Global growth and the stress it’s putting on our natural resources demand that we come up with different solutions.”

He explained the goal in Reno is to introduce energy-efficiency measures to reduce energy consumption by 50 percent by incorporating the right elements of building mass, glass, mechanical and electrical systems, daylight harvesting and natural ventilation.

A characteristic of an eco-district is the connection of all the buildings, allowing the structures to operate interactively with one another — some buildings dumping heat into the system while others are pulling it out. Wind technology, battery storage and thermal systems future-proof the development while reducing the overall energy consumption.

Another innovation is the development’s approach to water. The conventional approach would be to tap into the municipal water source and dump all waste into the community sewer system. It’s expensive for the city to build infrastructure to support such a massive project.

“Our approach is developing a ‘living machine’ system that treats waste water,” Straus said. “That system uses recovered water for toilet flushing, irrigation and cooling. Reverse osmosis creates potable water. It’s cost effective and costs less to develop. We will reduce water consumption compared to a conventional building by more than 50 percent, and the municipality doesn’t have to build as much infrastructure because we’re building it on site.”

In addition, having a central utilities plant for heat and cooling dramatically reduces energy consumption. That energy-load reduction improves the economics of the project and reduces costs for residents as well, according to Clark.

“Reno is on a population-growth trajectory, but this project, as aggressive as it sounds, will represent less than 10 percent of the demand for this kind of housing over the period of development,” Clark said. “We’re doing proactive risk management by not over-leveraging the project by constructing only a few buildings at a time, continually raising the bar of value as we go.

“This is a chance to create a wonderful city core. At the same time, we think this is a great example of how a city can demonstrate resiliency and sustainability. We believe what we do in Reno will influence other West Coast cities and cities in other parts of the world, and we truly hope that it will be the model for future development in Reno.”