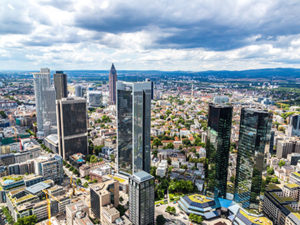 Wall of Equity and Debt

The current interest rate environment in the European Union (EU) creates the following situation, which can be described best as a “wall of equity meets a wall of debt”: Real estate projects, which could not have been realized/financed several years ago, are financed today using favorably priced equity, hybrid and/or debt capital. Because of steadily decreasing bank loan margins, loan-to-value (LTV) or loan-to-cost (LTC) ratios exceed the post-finance crisis level of over 80, sometimes 90 percent of the investment volume (the exceptions are the institutional products regulated by German investment law) — while still receiving very favorable terms, particularly in the area of “senior stretch loans.” Ever more crucial for success is the product, the piece of property, itself.

As a federally organized country, Germany does not have only one hotspot city, as the UK has with London, or France with Paris. Rather, the “safe core havens” (“A-cities”) are considered to be the top seven largest cities in Germany: Berlin, Hamburg, Munich and Cologne (all metropolises larger than 1 million inhabitants), as well as Frankfurt, Stuttgart and Dusseldorf (major cities between 600,000 to 800,000 inhabitants, with Frankfurt being the home of the European Central Bank).

Given the current favorable loan terms, core products in mostly A- or B-locations in A-cities, as well as A-locations in the second tier B-cities (major cities, 14 in total, normally between 250,000 to 600,000 inhabitants) of Germany are heavily overbought. Further, the so called “yield compression” takes place (yield levels decrease). This basically describes the situation where real estate gets more expensive, while the amount of cash flow generated by the property remains almost unchanged. This leads to a disconnect of the normally stable relation of rental income to investment price. A dangerous situation is created — considering the high LTVs/LTCs and the decreasing amortization periods for current German commercial real estate investments. A refinancing wave some years from now, with interest rates being 200 to 300 basis points higher, could move the market into a risky imbalance, as this would represent a multiplication of the interest burden: Property values might decrease simultaneously — in the worst case, accompanied by decreasing property cash flows — in times of potential economic recession/crisis scenarios.

Many investors have taken this thinking into their risk management considerations and now choose alternative investment strategies in order not to act pro-cyclically. But by doing so, they accept other systematic risks. Where will the pressure start leaking off of the “AB/BA-investment valve?”

I. Alternative timing of purchases

Institutional investors in core products (German capital allocation sources such as insurance companies, pension funds, occupational pension schemes, as well as foundations) are confronted with very high prices — multipliers respectively — in core locations or for core properties. In order to avoid this dilemma of acquiring supposedly safe real estate at too aggressive a price level, institutional core investors now attempt to acquire properties earlier in their life cycle. Thus, they intend to buy in the phase of property development, combining the purchase with a competitive “purchaser financing” for the project developer, in order to be able to acquire the desired property for their own institutional portfolio at acceptable multipliers.
II. Alternative types of real property
These days, the “conventional” German AB/BA property types, such as office, retail or residential real estate, are facing a high demand and, at the same time, an aggressively priced financing. As a consequence, institutional investors also consider completely different real property types as investment targets. This holds particularly true, because alternative investment markets to the real estate market (stocks, bonds, commodities, etc.) seem to be overheated or uncertain with regard to their return development as well.
Right now, in Germany, “managed real estate” such as corporate real estate (“light industrial”), hotel properties, as well as retirement homes/nursing homes and DIY superstores are “re-discovered” as “investment grade.”

Because of the yield compression in AB/BA-locations, A-locations in German minor C-cities (regionally important major- to medium-sized cities, 22 in total, with relevance for their periphery, normally < 250,000 inhabitants ) or D-cities (regionally important cities, 84 in total, without relevance for their periphery, normally < 100,000 inhabitants) are increasingly considered to be “investment grade” or are “artificially elevated” to investment grade status by accumulating large well-diversified portfolios consisting of smaller office or retail properties. Since alternative locations to A-locations are missing in these smaller cities, these investments in originally “Non-Investment Grade-Cities” offer indeed higher returns. The risks of a lack of fungibility or liquidity are diversified and thus reduced by a portfolio approach, creating even lower volatilities as in comparable AB/BA investments (due to the missing possibility of substituting the given locations).

These new forms of investment alternatives require new forms of financing and a reconsideration of the risk allocation. Financiers in the non-banking sector, such as family offices or hedge funds, as well as (German) mezzanine funds, take entrepreneurial risks, allowing them to achieve higher LTVs/LTCs; this also has regulatory reasons as deterministically organized players, such as banks (under Basel III), insurances companies (under Solvency II) or property funds (under AIFMD (Alternative Investment Fund Managers Directive 2011/61/EU)/KAGB (a German Capital Investment Act)) have to obey to the boundaries of their respective regulatory environment. With purchases often requiring a high leverage in order to achieve a high return on equity for the investors/limited partners, subordinate financing or external equity financing becomes the rule, rather than the exception, at least in the less regulated investment world.

What are the consequences of this new situation?

Real estate and capital markets inevitably grow together, at a higher speed than ever before. What does not sound spectacular at all to Anglo-American investors is comparably new to the historically bank-driven and financed German real estate market. For the reasons mentioned above, investors intensively consider not only conducting large capital investments solely by directly purchasing the asset (key word: “regulatory equity”), but also by setting up alternative investment fund (AIF) club deals or purely by using capital markets products, e.g., in the format of an investment in the same property using a bond structure via a private placement.

Ultimately, stricter regulatory rules lead to reduced risks on the real estate and financial markets in some instances, but cause a shift, and thus systematically, an increase of risks in other areas. The situation is intensified by the fact that, due to missing inflation, a real devaluation of nominal loans currently does not take place. This is of importance considering the high LTV/LTC environment next to the low, close to zero inflation rate (given that commercial rental contracts are regularly linked to an inflation index). In times of crises, this might cause a substantial problem.

In contrast to former cycles, riskier real estate investments in Germany are executed at an adequate pricing by the non-senior-debt lenders, i.e., the subordinate and external equity lenders. Consequently, in comparison to high-yield investors, low-risk investors will be confronted with fewer negative surprises. However, the first group consciously invests at the highest risks and thus, they (should) have diversified their asset allocation accordingly.

What if…
… What if interest or inflation rates increase sharply in the EU?

Interest rate levels and inflation rates normally show a high level of correlation because of the control function of central banks, in this case, the European Central Bank (ECB). At the moment, a locked-in situation can be observed, one of the reasons being the structural challenges of the EU. Accordingly, an increasing interest level would currently be counterproductive for the economic development of the EU (“consumer good” inflation).

A “sharp increase” scenario would lead to a situation, in which riskier and very risky projects (such as property development) would not receive a bank financing at current margin conditions and LTVs/LTCs anymore. The latter financing could only be achieved by “entrepreneurial” external non-bank financiers such as family offices, private equity funds, etc., at very expensive (risk adequate) conditions. The interest burden would be so high, that projects using these financing sources could not be realized anymore within the current structures (i.e., not enough equity and/or not enough ongoing project cash flow).

If sharp increases in interest rates happened, problems would occur both on the market for real estate development, as well as on the market for refinancing bad, not well-maintained, existing assets at high LTVs. The latter cash flows would be challenged as the projects would not be able to service interest and principal payments with their existing cash flows. They would be “under water” and would need expensive refinancing which could not be afforded. This might lead to pro-cyclical sales of this market group at the same point in time and would thus lead to market devaluation. The German market would calm down to a certain degree in a currently heated up situation, as long as the interest rate increases would not unexpectedly be too sharp and thus the reactions to it too strong.

In summary, it can be stated that a “soft landing” would be healthy for the German property market. This could be caused by moderate, step-wise, pre-announced interest rate increases over a longer period of time. A “hard landing” introducing abrupt changes in the interest rate could lead to heavy market imbalances (compared e.g., to the U.S. housing market in 2007).

Meanwhile, we are, however, far away from such scenarios. As the saying goes, “it ain’t over ‘til the fat lady sings…” This saying refers to the last, 20-minute long song of the opera Der Ring des Nibelungen. When the song comes to an end, Armageddon happens. But for right now, the lady still keeps on singing …