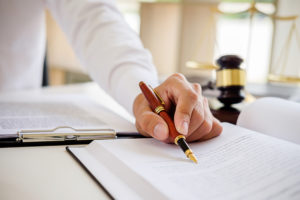 With 42 U.S. states having issued statewide stay at home orders and many municipalities declaring their own restrictions on business operations, questions
have arisen over the power to make these mandates and what constitutes an “essential business”.

How do you counsel a client who believes their rights are being violated?

What Are My Rights During a Pandemic?

Emergency declarations and executive orders have been entered during the COVID-19 pandemic by the President, by many Governors, and at other local and regional levels of government. Most of them state that the government agencies may “commandeer” private property and may deprive citizens of other liberties and rights, the like of which has not happened in our country’s history, except perhaps in times of war. Any true emergency may empower government to undertake action(s) that would not be authorized in non-emergency situations. But emergencies do not create government power, nor do they diminish limitations on that power.

Lawsuits have recently been initiated in different parts of the country challenging government shutdown or “stay at home orders”. Faced with the prospect of more similar actions in the future, and a possible prolonged state of emergency, how can our citizens measure whether these governmental actions and mandates are, in fact, lawful?

To answer this question, we must remind ourselves that all government power in our country emanates from the United States Constitution, which was written during a state of emergency and because of that state of emergency. It purposefully established:

(a) a system of checks and balances with three branches of government;

(b) the principal of federalism, which creates and recognizes two sovereign powers, the federal and state governments; and

(c) a Bill of Rights which further specified the limitations of the government’s powers.

The U.S. Constitution imposes limits by dividing government against itself — both by giving different branches of government separate functions and by forcing different governments to share power.

With this in mind, we then consider which branch of government has acted in order to determine whether that branch possesses the power to act in that fashion. For instance, under our system of government:

(i) the legislative branch creates or makes the laws;

(ii) the executive branch administers the laws; and

(iii) the judicial branch reviews and interprets the laws, including the actions of the other two branches of government.

So how can an executive like the President, a Governor, a regional or county leader, or a mayor, therefore sign an “executive order” which authorizes the government to seize or “commandeer” private property, or to “shut down” certain businesses and liberties and not others?

These questions can be answered by determining whether those executive actions or mandates fall within or exceed the power vested in the executive branch, As an example, President Trump’s March 12 emergency declaration refers to the powers created by Congress in 1988 legislation known as the Stafford Act, and his declaration administers those powers mainly through the Federal Emergency Management Agency.

Similarly, most executive orders recently issued by various Governors to commandeer properties, or to shut down “non-essential” businesses, rely upon prior State legislation which already made the laws in question and the executive branch is now administering or enforcing those laws.

But when does an executive order, seemingly authorized by legislation, go too far? How can a Governor decide which businesses are “non-essential”? When do the government’s actions, presumably undertaken under its police powers to protect the health and safety of its citizens, rise to the level of a compensable taking of private property, entitling the owner to just compensation which is guaranteed by the Constitution? For instance, while shutdown orders on properties such as golf courses and beaches have already been upheld by courts in Pennsylvania and Florida, a federal lawsuit challenging Mississippi’s refusal to allow a church to conduct religious services through a “drive through” window has caused the U.S. Justice Department to intervene, suggesting that restriction on the First Amendment rights of the congregants may have gone too far.

The limits of executive power or legislative power are supposed to be reviewed by our courts. While courts generally give deference to government actions, and are likely to give greater deference to government actions undertaken during emergencies, if the actions violate other Constitutionally-guaranteed rights, the checks and balances should provide Americans with some assurance that the violation of their rights, even during our state of emergency, can be reviewed by our courts. And although individual rights may be deprived during the state of emergency, hopefully that deprivation will be temporary, the deprivation will not be so severe that it will cause irreparable harm to individual(s), and the state of emergency will be a distant memory by the time the deprivation can be reviewed by the judiciary in order to determine whether such deprivation entitles the deprived party to a viable remedy at law or in equity. •