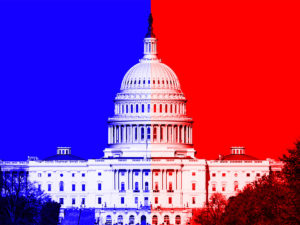 Political Polarization was listed as the #7 issue in the 2021-22 Top Ten Issues Affecting Real Estate® by The Counselors of Real Estate®.

There seems to be nothing new about America’s political polarization. Depending upon one’s historical perspective, this might be dated to the 1990s “Contract with America,” the 1960s Vietnam and Civil Rights movements, even deeper to the New Deal in the 1930s, or to the Reconstruction Era of the 19th century. It can be framed as an entire historical narrative, even in mythic terms, as the 1776 story versus the 1619 story, a contrast even now focusing debate in Washington D.C. and in state capitols.

It is not our intent to pick sides in this divided polity. Doing so only exacerbates the chasm. We want, first of all, to reflect on the pragmatic harm that the division is inflicting on our society, our economy, and on the real estate industry which is our professional field.

Alexis de Tocqueville wrote in Democracy in America (1835), “What is meant by ‘republic’ in the United States is the slow and quiet action of society upon itself. It is an orderly state really founded on the enlightened will of the people. It is a conciliatory government under which resolutions have time to ripen, being discussed with deliberation and executed only when mature.”1 Today, such a description is so wildly inaccurate that it sounds quaint. And yet it outlines a standard, an ideal, against which we can see how present circumstances betray social ineffectiveness that corrodes not only American values, but value in America.

In mechanics, friction is a retarding force. Overcoming resistance wastes effort and creates unwanted heat. This is an apt metaphor for the present inefficiencies impeding ‘the slow and quiet action of society upon itself.’ Political friction is holding back America’s economic productivity. We are squandering resources as we try to address problems that arise from the partisan divide, rather than problems confronting us as common issues.

Early 2021 Gallup polling shows 80 percent of Americans personally worrying about the availability and affordability of healthcare, a majority worrying “a great deal”. Moreover, 63 percent are dissatisfied with the current state of the healthcare available to them, 41 percent being “very dissatisfied”.2 In late November 2020, after the election, a majority of those polled (56 to 42 percent, with 2 percent having no opinion) maintained a view that it was a responsibility of the federal government to assure that all Americans have healthcare coverage.3

In the past 14 months we have seen two major successes: the Operation Warp Speed vaccine development program in 2020 and then the deployment effort in early 2021 that has now seen about 162 million (48.8 percent) fully vaccinated and about 56.3 percent of the U.S. population having received at least one dose as of July 22nd.4

And yet, when it came time for a vote on the COVID-19 relief bill in Congress, there was a virtually total party-line split. This indicates that ‘inside the Beltway’ divisions are far more hardened than the collective judgment of the American people. That is a cause for frustration, but on the broad scale may offer a glimmer of hope.

For the economy and for the real estate industry, the risk of health care vulnerability could not have been more starkly framed than it has been in the pandemic. To the degree that recovery of user-demand in commercial properties depends both upon employers, workers, and property owners/managers developing confidence in public health measures and in the general population’s ability to be secure in maintaining its wellness, the dysfunction in Washington (and across states) in pragmatically focusing on American healthcare acts as a drag on the economy and on real estate, which houses the day-to-day functioning of that economy.

The issue of immigration has been festering for decades and, if anything, has intensified in its status as a partisan hot-button identifier for politicians. Meanwhile, according to the sequential polling data from Gallup, Americans have been achieving greater consensus. In 2002, 58 percent of those polled felt that the level of immigration should decrease, 30 percent believed that it should be sustained at the then-current level, and only 8 percent suggested an increase in immigration would be desirable.5 In point of fact, the volume of legal immigration in 2019 was 1,031,765, just 2.4 percent lower than the level in 2002.6

As of 2020, Gallup found that 36 percent of those polled favored sustaining current immigration volume, while those recommending an increase had soared to 34 percent. Those believing immigration should be curtailed had dropped by half to 28 percent.7

In April 2021 the Cato Institute released its report on immigration, “E Pluribus Unum”. Their survey of 2,600 U.S. adults found that few Americans want immigration shut down. The margin favoring continued population inflow was ten-to-one; only nine percent of the respondents advocated closing the border. A majority, 72 percent of Americans, believe that immigrants come to America to “find jobs and improve their lives.” They favor shorter waiting periods for prospective immigrants (five years or less is the period recommended by 80 percent; five years is the current average). Across the board, 53 percent of the survey respondents believe the ability to immigrate is a “basic human right”, and 55 percent support a pathway to citizenship for unauthorized immigrants if they meet certain requirements.8

On balance, even in these hyper-partisan times, the Cato survey found Americans resonating with the nation’s self-understanding as ‘a nation of immigrants.’ With all that, it has been 35 years since a major immigration bill has made its way through Congress, midway through the second Reagan administration. This year, bipartisanship on immigration has been hard to come by, although good faith efforts seem to be underway. But when the American Dream and Promise Act came up for a House vote, only nine Republicans voted “yea.” And when the Farm Workforce Modernization Act, supportive of immigrant agricultural labor, was voted on, 182 Republicans voted in opposition, with just 30 joining the Democrats in passing the bill. In the months since, neither bill has been able to get a vote on the floor of the gridlocked Senate.

Business support for immigration reform has been strong. The U.S Chamber of Commerce, the National Association of Manufacturers, and the Business Roundtable have all endorsed an approach to immigration that is encouraging of welcoming new workers, something of some urgency given current demographic trends.9, 10, 11 The pandemic did, in all truth, put some of the pressure of any labor shortfall to the side in 2020. But with the economy re-opening with some vigor in 2021 and 2022, the realities of Boomer retirements, an anemic volume of native-born labor force entrants in the present decade, and the decline in the female labor force participation rate since the late 1990s, will again be squeezing employers. This is already evident in the data and in corporate commentary.

Pre-COVID, real estate was feeling the pinch. The National Association of Home Builders has stressed how the broken immigration system has hamstrung the production of housing, delaying deliveries and driving up prices.12 Building service workers, through their union (SEIU), are calling for an immigration approach facilitating immigrants’ full participation in the economy as an immediate priority. And it should also be noted that many forms of real estate, including hotels, restaurants, personal service retailing, and medical offices, have high levels of immigrant workers in their occupancy profile.

So it is that we consider the present tribalism of American politics as a top issue for real estate now and in the foreseeable future. It hinders our productivity and therefore the nation’s economic strength. And the real estate industry’s well-being is a function of our economic growth. Partisanship has been distilled into more extreme positions within Washington by the vagaries of primaries, gerrymandering, and the propensity of incumbents to stick to the status quo. In fact, Congress is more divided on many issues than is the American public as a whole.

We acknowledge that there is legitimately a diverse range of political ideology in America. But there must also be a kind of Venn Diagram in which the political positions can acknowledge an area of overlap, common ground that is apparent when those outside the Beltway are queried. Even though the Red and Blue map represents truly differing perspectives and priorities, the nation is decidedly less polarized than are its elected representatives. The economy and the real estate industry would be far healthier, as would American society, if the pattern of party-line voting in the halls of Congress could be transcended in favor of something very traditional: the defining of politics as the art of compromise. •