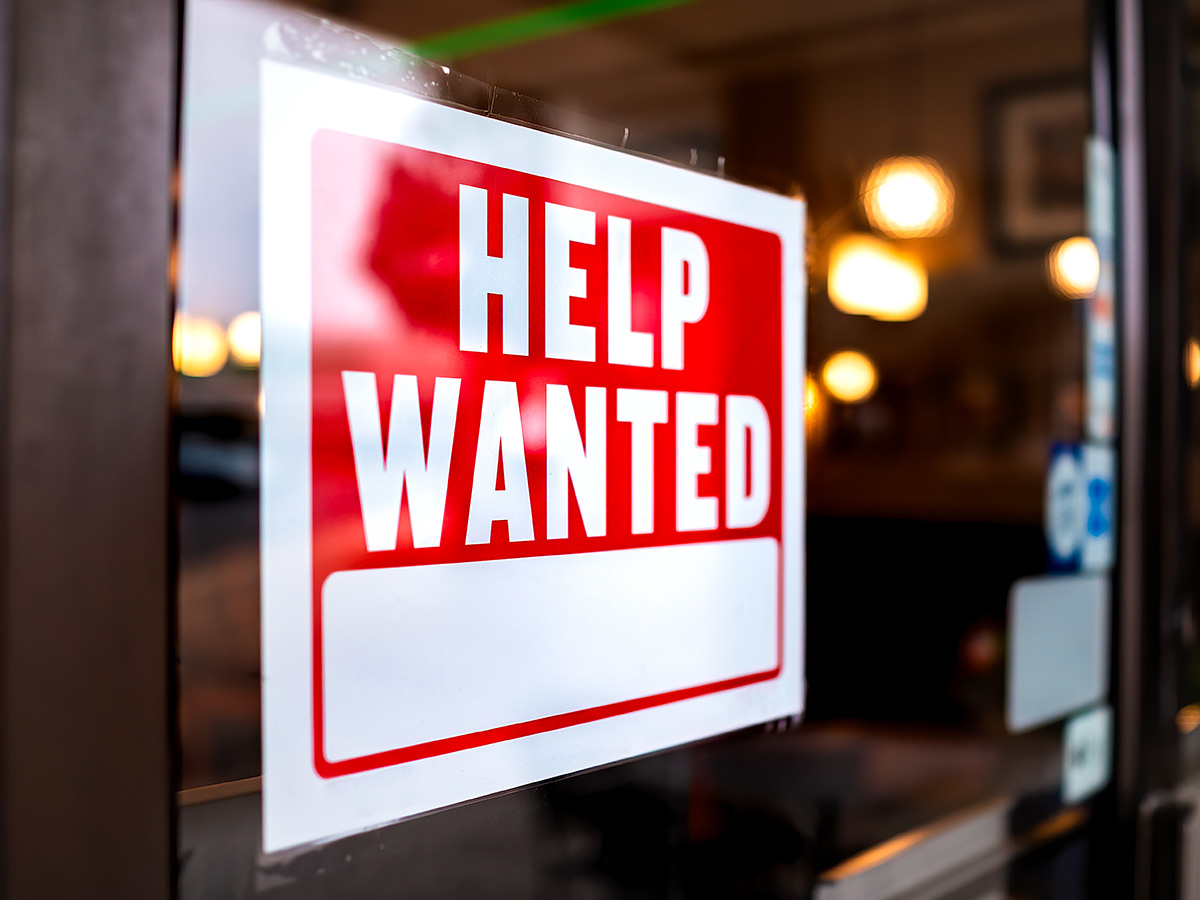 Labor Shortage Strain was listed as the #6 issue in the 2022-23 Top Ten Issues Affecting Real Estate® by The Counselors of Real Estate®.

“The implications for property markets are mostly indirect but potentially significant. Occupiers will lease less space if they lack the workers to run their businesses.”

In the immediate aftermath of the pandemic lockdown, many communities began to see a most unusual sight: “help wanted” signs sprouting up on storefronts in the middle of the sharpest economic contraction in modern times. A growing number of employers began to report difficulties in finding the workers they need to operate their restaurants, shops, and other businesses.

The origins of the worker shortage are clear. Many workers initially were afraid to re-enter the workplace for fear of contracting the coronavirus. Plus, the government’s generous supplementary unemployment benefits and pandemic checks provided ample incentive for workers to remain on the sidelines.

But the COVID benefit programs ended long ago around the time that COVID vaccines became widely available, yet the worker shortages have only grown. The number of job openings tracked by the Bureau of Labor Statistics (BLS) is higher than they’ve ever been – both absolutely and relative to the total number of jobs in the economy – since BLS started tracking job availability more than two decades ago.

More problematic for employers: There are almost twice as many unfilled positions as unemployed workers to fill them, equating to a shortfall of more than five million workers. In the prosperous year prior to the pandemic, there were about 20% more open positions as unemployed workers, and the ratio had never reached 25%. It peaked this spring at 99% and was still over 80% as of June 2022.

So where are all the workers? The vast majority are already back on the job. The economy has now regained all of the 22 million jobs lost during the initial lockdown. The number of unemployed workers quadrupled during the recession but is now under six million, on par with the level on the eve of the pandemic.

Second, there is often a mismatch between the open positions and the workers available to fill them. This takes two forms: geography (the available workers don’t live within commuting distance of the open jobs) and qualifications (many of those idle workers don’t have the experience or credentials required for the jobs available). However, this mismatch problem is hardly new and there’s little evidence that it’s gotten worse.

Lastly, there’s been a profound change in how workers view their employment status. For various reasons, the pandemic prompted many workers to reassess what type of work they want to do, under what conditions, and for what pay – or even whether to work at all. As a result, firms are finding it increasingly difficult to retain their workers who are quitting jobs in record numbers in search of better pay or opportunities.

As with job openings, BLS is reporting an unprecedented number and level of workers (as a share of all workers) quitting jobs each month. The two are related, as most jobs left behind when an employee quits must be backfilled with another worker, thereby creating another job opening. Economists generally view high quit rates as a positive sign that workers have enough confidence to leave one job for another. However, the current churn of workers is amplifying the overall worker shortage. The quit rate is now fully 20% higher than before the pandemic.

On top of all those supply-side constraints, demand for labor is remarkably strong. Labor demand, which is measured by the sum of both filled and open positions, typically takes several years to recover after a recession. It took over six years for labor demand to reach its prior peak after the Great Financial Crisis of 2008, for example, but less than two years after the pandemic recession. Labor demand is now slightly higher than before the pandemic. All this helps explain why so many firms cannot hire all the workers they need, even though the size of the labor market is virtually back to its pre-pandemic level, down less than 1%.

Worker shortages are not spread equally across industries, however. Both job openings and quits are concentrated in lower-wage sectors, as workers have been taking advantage of tight labor markets to upgrade their positions. The hospitality and restaurant sectors have seen some of the largest increases in quits and job openings, whereas workers shortages and turnover are much lower in better-paying sectors such as business services (e.g., attorneys and accountants) and financial services (e.g., banking, and real estate brokerage). Logistics, manufacturing, and health care have also experienced above-average increases in job openings.

These shortages are compounding even more acute supply-chain shortages that emerged in the earliest days of the pandemic. With factories, mines, and processing plants shut for extended periods in different parts of the world, firms scrambled to find new suppliers for their operations.

It all adds up to a situation normally seen only during wartimes: Worker shortages and supply bottlenecks so severe that many businesses have been forced to cut back on production, despite ample consumer demand. Restaurants and stores close early or remain closed on slower days. Factories cut shifts or go on hiatus, magnifying the supply shortages.

The implications for property markets are mostly indirect but potentially significant. Occupiers will lease less space if they lack the workers to run their businesses.

Another indirect impact may prove even greater: With wages and the cost of other inputs rising due to shortages, the Federal Reserve has undertaken aggressive monetary actions to tame inflation. Thus far, the signs are mixed, with GDP falling slightly in the first half of 2022 and yet jobs still growing strongly. But any action sufficient to temper wage and price growth will inevitably cool the economy. As discussed elsewhere in our Top Ten report, a slowing economy would reduce all types of real estate transactions, from leasing to lending to sales, impacting all commercial real estate professionals whose business depends on transaction volumes.