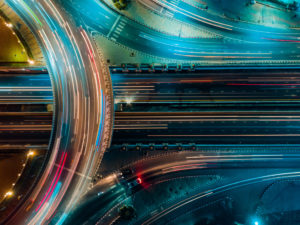 The current crisis makes the need for vast improvements to infrastructure even more evident.

How has the current health crisis made glaringly apparent the need for vast improvements to infrastructure and the supply chain in the United States?

I was asked to write an opinion piece on infrastructure. Considering where we find ourselves as a country, I decided to present a more central question, not only for infrastructure, but for our collective future.

As a young man, I read The American Challenge, by Jean-Jacques Servan-Schreiber. The book was meant to be a ‘call to action’ for Europeans to meet the global commercial onslaught and overwhelming, at the time, political influence of America. As an American, it left me with an unintended and lasting question, until now – would the day come when we would face a similar challenge.  It has and we are.

While in the succeeding decades Europe achieved certain success in meeting the American Challenge, in my opinion, it generally failed to meet what Servan-Schreiber thought possible, not because of the external ‘American Challenge’ but because of choices made that led to internal failings. Unfortunately, we have followed a similar path for decades and are now dangerously near the point of no return. Infrastructure, or lack thereof, has and will play a major role in where we go as a country, but this will not be the only thing.

Our infrastructure system was designed and built decades ago when we had half of today’s population.  Most of our infrastructure is far surpassing capacity, life cycle and is dangerously pushed beyond design limits. As an example, while the U.S. has, by far, the most air travel of any country in the world, according to our DOT, we typically run delays in arrivals/departures of around 20 percent per annum, costing us over $35 billion a year in lost productivity. We have come to accept this as normal.  It is not.

Another example is found in our maritime infrastructure.  We effectively have four ‘coasts’ – East, West, Gulf and ‘Inland’; the latter being our inland waterway system with the Mississippi as the main artery and supply route for most of our exported commodities.  Would you be surprised to learn that we still use a system of locks, some of which were built at the end of the 19th Century and most in the 1950s?  Do not be.

Figure 1 (see below) is the latest American Society of Civil Engineers (ASCE) report card (2017) on U.S. infrastructure.  It is a dismal, self-explanatory snapshot of an unsustainable situation for a global leader and for an efficient, productive nation. 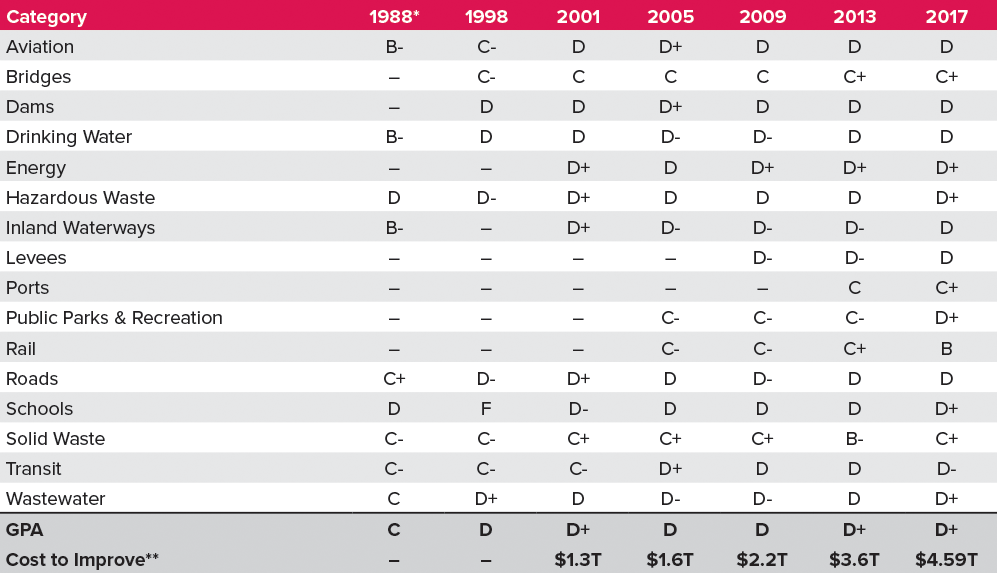 Source: https://www.infrastructurereportcard.org/making-the-grade/report-card-history/
*The first infrastructure grades were given by the National Council on Public Works Improvements in its report Fragile Foundations: A Report on America’s Public Works, released in February 1988. ASCE’s first Report Card for America’s Infrastructure was issued a decade later.
**The 2017 Report Card’s investment needs are over 10 years.  The 2013 Report is over eight years.  In the 2001, 2005, and 2009 Report Cards the time was five years.

We are a young country and an ongoing social and political experiment the likes the world has never known. Our history is not based on following, but in leading, through innovation, commerce and, most importantly, on the ideal of freedom.

The coronavirus brought into clear focus the crossroads we find ourselves in now and shown us that the path forward cannot be the one we have followed the last few decades.  If ‘our day in the sun’ has passed, it will not be because of an external challenge, like China, that defeated us, but an internal one – us, and the choices we made and those we did not take.

Our challenges ahead are complicated, big and seemingly impossible e.g., re-starting the economy, the national deficit, state of infrastructure, education, competitiveness, re-establishing our manufacturing base and in turn, growing our middle class that has been decimated over the decades, and on and on.

Before the virus, some held the opinion that certain things like re-shoring manufacturing here would be seemingly impossible, that ‘those days’ were, for all practical purposes, long gone. Well ladies and gentlemen, we have recently faced the fact why this, going forward, for us is not an option. We need a diversified, strong economy and infrastructure is and will be a cornerstone of fomenting and maintaining this.

We are Americans. We take on complicated and big and when told ‘seemingly impossible’, all we ‘seem’ to hear is ‘possible’.  This is what we do.  This is who we are.  This is our DNA.

As a nation, once again, we are at a crossroad. The path we take will define us for decades, if not centuries to come.  Where are we going and how will we meet the 21st Century American Challenge?

To use an American baseball idiom, ‘It’s time to step up to the plate America!’  Let’s make sure ‘we knock it out of the park’. •