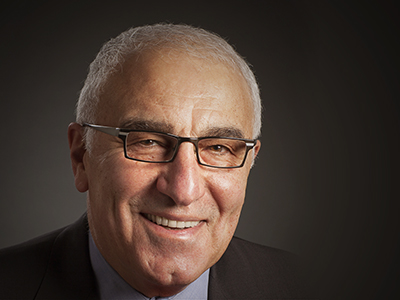 Felix:  Ray, how did you get started in the commercial real estate industry?

Torto: It was a little bit of a lucky break. I was working in the public sector as Commissioner of Assessing for the City of Boston at a time when developers from Texas were coming to Boston to build office buildings.  They came to me because the taxes they had to pay were based on my decision.

I was (and still am) an economist and I’d say, “Why did you decide you should build an office building in Boston?” And they had no good answer.  Nothing that dealt with the question of demand for office space.

Felix:  What year was this?

This was 1980.  It was right after Texas (Houston, Dallas and Austin) had burst and vacancy rates were in the 30s. Boston was building, and they were looking to Boston as the next place to build office space. I realized they didn’t have any good answers and I also realized at the same time that the real estate industry was becoming more and more institutionalized. There were more people with business degrees in the decision-making process in real estate.  I figured there were more analytical ways of evaluating whether to build or not build, or invest, and so I ended up forming a partnership with Bill Wheaton. Bill and I built a research company that analyzed the market and forecast what was going to be the future demand and supply. And I turned out to be quite lucky.

Felix: Were your clients originally the developers themselves?

Torto: Our first client was a developer, Cabot, Cabot and Forbes.  They hired someone to do a market study of St. Louis and paid $50,000 for it. They threw it at me saying, “This is a piece of s—. Can you do better?”  And I responded, “Yeah.” So they gave us a contract for seven cities. That was when I called Bill Wheaton because Bill had the model.  I said, “Bill, you’ve got the model and I have the contract, do you want to form a business?” Bill and I met and he said, “Yes, let’s form a business but if we do any academic papers (because we’re both academics) the papers are going to be Wheaton and Torto. I said, “That’s fine, the business will be Torto and Wheaton.” And that’s the way we started. Bill always had more focus on the academic side.

Felix:  As the Torto Wheaton business moved forward, who did your clients become?

Torto:  We got another lucky break. We got a one-quarter-inch write-up in The Wall Street Journal about us building these econometric models and the next thing we know we had a call from Jim Vinson.  Jim was the president of Merrill Lynch Hubbard.  He said, “What are you guys doing up there in Boston?”  And, as a cocky academic, I said, “You buy lunch we’ll come down and tell you.” He said, “Okay, come on down.”

So we went down to New York and he listened to what we were doing and he was interested – he gave us a contract.  Then we got another contract from Prudential in a similar situation. These were CEOs who were interested in the industry and they were thinking about what’s good for the industry and I think they thought, “This is interesting, what these guys are doing, maybe they’ll be successful, maybe they won’t, but I’ll throw them a little money and give them a chance to get started.” That’s why I say we were very lucky. We met some very good people along the way that were developers and investors who helped finance our beginnings.

Felix:  Part of the great story of Torto Wheaton is the people you had there and then as things evolved when you merged or sold to CBRE some of those people have moved on to other places.  You had a great group of people.

Torto:  They were super. In fact, I think it was the way we managed them. We used to tell them, “We don’t care what time you come in, and we don’t care what time you go home, just get your work done.” We measured outputs not inputs. They all took ownership of their work, and they all took pride in their work, and so they got it done well – it was a very comfortable place for them to be together. They were all intellectually stimulated by the kinds of colleagues they had and the conversations we had all the time about what was happening in the world and what was happening in real estate.

Felix:  That philosophy that you described, “We don’t care when you come in or when you leave, just get it done” has really gotten much more popular today especially with the millennial generation because they don’t like being told what to do.

Torto:  Well, my people were smarter than I was.  It was better to listen to them, with their ideas and I would just have questions. I would start with a question and they would come up with the answers.  That was great.  I know that for Bill and me it was a great experience.  I’d ask a question and Bill would disagree with my answer.  The next day he’d come back with a better answer, he had thought about it, and we’d move forward.  We were always growing intellectually and that’s what made a lot of the people happy to be there. There was a lot of personal growth.  It also helped that the firm was growing and the clientele was very intelligent and the clients asked a lot of good questions.  And then there were a lot of interesting issues in real estate – the beginnings of commercial real estate as an asset class.

Felix:  The reputation of Torto Wheaton had always been stellar. It’s a great story. I know you mentioned that you’ve been an academic for many years and you still are. I know you mentor students as well and give them advice. What’s some of the advice you give to students today, those that are passionate today about getting into the commercial real estate industry?

Torto:  Well, I answered your first question by saying it was a little bit of luck. The classes have guest speakers that come in – 4 or 5 during the semester – and the first question I ask the speakers is, “How did you get into real estate?” The answer in all cases is ‘luck’, ‘random’, ‘by chance.’

The advice I give a lot of my students is that if you’re interested in real estate it takes a little bit of luck – there are no five-year plans. When you see an opportunity that works for you, you must execute.  It isn’t just the luck – you must execute on that luck.

I have a lot of very, very serious students at Harvard and they all had five-year plans and I try to discourage them from plans like that. A lot of things change. And the other thing is to try to give them an understanding about the industry.  They get to meet a lot of people and I keep telling them that in real estate everything is negotiable. I remember a good friend of mine at a development firm and at a lunch they made an offer to him that was extremely great. He turned it down because he knew everything was negotiable and he could do better.

Felix: I’ve spoken with students over the years and I ask them, “What do you want to go into?” and many have said “development.”  I’ve had one mentor in my career, a fellow named Dick Steinberg from Mall Properties. I went to see Dick and I told him what the students are saying.  Dick said, “You tell them that no one hires a developer.  You want to be a developer, go buy a run-down building in Brooklyn, get friends and family money and redevelop it and then, you’re a developer.”

Torto: I had some students who were trying to develop and come up with a plan for financing development of low-income housing.  They wrote up a whole plan that eliminated the developer.  They figured that was the guy that made the most money and he probably didn’t have the best of intentions and they thought of him as someone who is a slum landlord.  They were young, liberal students and they said, “you get rid of that guy and we save all this money and we can have this housing.” So I asked them, “Who is the quarterback?  You need someone who has the vision, brings in the money, buys the land and signs the contracts.” Anyway, the point of the paper was changed.

Felix: You and I have lived through a time when the commercial real estate industry has become global and it’s amazing how small a world it’s become.  You mentioned that you have some international students in your programs.

Torto: At Harvard we have, at least in my class, two-thirds of the students are from overseas and 50% of that group is from China and they speak better English than I do!  I don’t speak Mandarin.  They’re smart young people.

Felix:  Are some of those students planning on going back home to China after they’ve gotten their degree?

Torto: They don’t look at the degree as the end of their education.  They look at maybe a year or two of experience, working for an investment manager or some agency in the United States and then a lot of them have an interest in going back and contributing to the development of their own country.  But the education isn’t just the degree.  The education is working in the industry.

This interview was originally published on October 27, 2017, by Steve Felix at stevefelix.blogspot.com. Republished with permission.