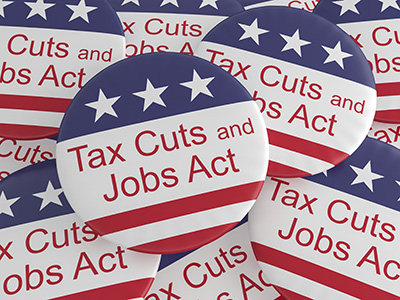 Originally published in 2019, this piece was updated on October 23, 2020, to reflect additional tax changes in the CARES act. Click to view the original version.

On December 22, 2017, the Tax Cuts and Jobs Act (TCJA)—the most sweeping tax reform since 1986—was signed into law. The TCJA has had a tremendous impact on all industries, including commercial real estate. In March of 2020, the Coronavirus Aid, Relief, and Economic Security Act (CARES Act) was passed, including several provisions that impact the treatment of depreciable assets.  This article will examine the effects of tax reform and subsequent legislation from the CARES Act on Bonus depreciation.

Bonus depreciation was introduced by Congress in 2001, in an attempt to stimulate the economy following the attacks of September 11th.  Bonus depreciation is a tax incentive that permits owners of qualified property (that is, property with a recovery period of 20-years or less) to immediately deduct a percentage of the asset’s depreciable basis. Personal property and land improvements are eligible for Bonus, though building core and shell assets are not.

The PATH Act (Protecting Americans Against Tax Hikes) legislation was in effect prior to the TCJA. The TCJA made two very significant changes to the bonus depreciation rules established under the PATH Act:

Investors are already seeing tremendous tax savings under the TCJA. However, to take full advantage of the aforementioned changes to bonus depreciation, one key date must be considered. Regardless of property type, bonus eligibility is determined by the date September 27, 2017.

Eligibility for bonus depreciation under the TCJA is contingent on a written binding contract (WBC) signed after September 27, 2017. If a WBC—as defined by what is enforceable under state law—was in effect prior to September 27, 2017, the property is not eligible for 100% bonus under the TCJA.  This is still noteworthy in 2019, as owners will frequently commission a “look-back” study, focusing on a property placed-in-service in years past. The “catch-up” depreciation accrued will depend on the legislation in place at the time the building was placed-in-service, and as such, the September 27, 2017 date is still an important consideration.

Consider the acquisition of an existing manufacturing facility by new owners. The WBC was signed on December 3, 2017, and the depreciable basis was $10.8 million. A cost segregation study was not performed at the time of the acquisition.  The client would like to have a look-back cost segregation study performed at this time in order to take advantage of the bonus depreciation allowed under the TCJA.

Cost Segregation is an engineering-based analysis in which fixed assets are isolated and reclassified into shorter-lived tax categories, resulting in accelerated depreciation, tax deferral, and increased cash flow. A study may be performed throughout the real estate life cycle on acquired, renovated, or newly constructed properties. Many studies are commissioned when properties are initially placed-in-service, but the IRS also permits “look-back” studies. These studies allow taxpayers to retroactively claim all the depreciation that they would have received had they performed a study when the property was originally placed-in-service.

Under the prior PATH Act rules acquisitions like this one would be ineligible for bonus depreciation. The impact on results is immediately apparent.

For projects in which substantial construction began after September 27, 2017, TCJA rules are in effect, and the projects are eligible for 100% bonus depreciation. This also applies to renovations performed on “new-to-you” acquisitions.

The nuances within the TCJA have further expanded the utility of a cost segregation study. These engineering-based studies have long helped owners ensure that they have the documentation and support needed to accelerate properties into the 5, 7, and 15-year asset categories in order to capture bonus depreciation.

Prior to the TCJA, a cost segregation study on a smaller property might not have provided a sufficient return on investment. With acquisitions eligible for 100 percent bonus under the TCJA, smaller-basis properties are becoming good candidates for cost segregation. Consider a small neighborhood shopping center, acquired with a depreciable basis of $1.5 million. Engineers are able to move 13 percent to 5-year depreciation and 10 percent to a 15-year timeline. Note that post-TCJA it is well worth performing a $6,000 study, whereas pre-TCJA a study may not have been warranted.

Investors in larger-scale projects are seeing commensurate larger-scale savings. Consider the new construction of a multifamily garden-style apartment complex with a depreciable basis of $5 million. In a cost segregation study, 15% of assets were moved into 5-year class life, and another 10% moved into 15-year class life. The impact of 100% bonus depreciation under the TCJA is staggering.

Finally consider a very large project, a high-rise office building with 23 tenants and a 5-story parking structure. The building’s depreciable basis was $24,570,386 and engineers moved 9.5% into 5-year class life and 0.3% into 15-year class life.

The TCJA contained an unfortunate drafting error.  The recovery period of QIP was intended to be 15-year, and as such it would have been eligible for Bonus depreciation (since assets with a class life of 20-years or less are Bonus-eligible.)  In the drafting process, QIP was erroneously left with a 39-year recovery period.  The CARES Act corrected this error, assigning QIP placed-in-service on or after 1/1/2018 a recovery period of 15-years, making it eligible for bonus depreciation.  The fact that the change is retroactive is a significant win for taxpayers, allowing them to revisit preexisting cost segregation studies and get even more value.

For example, consider a newly constructed commercial office fit-out with a depreciable basis of $870,519. The suite includes private offices, cubicle areas, conference rooms, a server area, and an entry lobby. The fit-out was completed and placed-in-service in February of 2018.  The cost segregation study was revisited after the CARES Act to incorporate bonus-eligible QIP.  The impact of this change is summarized in the table below.

Section 179 is an entity-level election for “trade or business” that permits the full purchase price of business equipment to be written off in the year of purchase. It has been in effect since 1958 and has long encouraged businesses to invest in themselves.

The TCJA expanded the scope of Section 179-eligible assets to include the following improvements to nonresidential building systems placed-in-service after the building was placed-in-service: Qualified Improvement Property, roofs, HVAC, fire protection and alarm systems, and security systems. This opened up a new expensing strategy for commercial real estate owners, particularly as the dollar limitation of the election was boosted from $510,000 to $1 million. New and acquired assets are eligible for expensing under Section 179.

The Interest Deduction Limitation under the TCJA may impact Bonus eligibility. Effective January 1st, 2018, this provision subjects companies to a limitation on deductible business interest expense. Under the CARES Act, the deductible amount is capped at 50% of adjusted taxable income after certain adjustments.1 There is some good news for smaller firms. Generally, if a firm’s three-year average annual gross receipts are $26 million or less yearly, it is completely exempt from the deduction limitation, and may fully deduct their business interest as an expense.

MACRS, or Modified Accelerated Cost Recovery System, is the IRS-approved method used by businesses that wish to accelerate depreciation on business equipment. MACRS provides an asset classification system delineating the number of years of depreciation associated with each type of asset.

In addition, taxpayers who fall into one of the following categories may be able to “elect out” of the limitation: real property development, redevelopment, construction, reconstruction, acquisition, conversion, rental, operation, management, leasing or brokerage trade or business. If a taxpayer chooses to elect out of the 163(j) limitation, real property must be depreciated using ADS (Alternative Depreciation System) as follows:

Again, Bonus-eligible property must have a recovery period of 20-years or less.  As such, irrevocably electing out of the Interest Deduction Limitation means that above assets, mainly qualified improvement property, will not be eligible for Bonus depreciation.  The implications of this decision warrant careful consideration.

However, additional new legislation means that this decision need not be set in stone.  Rev. Proc 2020-22, passed in April 2020, permits revocations of elections-out-of-163(j) made on 2018 or 2019 tax returns and allows late elections-out-of-163(j) back to 2018. Now that QIP is eligible for 100% bonus depreciation under the TCJA, many taxpayers who initially chose to opt-out of 163(j) are starting to rethink that decision, and this is a valuable opportunity to “turn back the clock” if desired.

The TCJA and CARES Acts will continue to have significant impact on real estate owners in the coming years, with the retroactive changes being particularly timely. Having a sound Cost Segregation Study performed on any renovation, new construction, or acquisition will allow the owner of real estate to fully take advantage of Bonus depreciation. In addition, it cannot be overstated that seeking advice from CPAs well versed in real estate matters is more important than ever. Partnering with qualified advisors will ensure that the real estate owner is fully aware of the role of Bonus depreciation as part of a comprehensive overall tax strategy. •

Do you disagree with the author’s conclusion? Have a different opinion or point of view? Please share your thoughts with REI, or better yet prepare and submit a manuscript for publication by emailing the Real Estate Issues Executive Editor (or Board) on this article to rei@cre.org.

1. Different rates apply to partnerships and “S” Corporations in 2019.↩