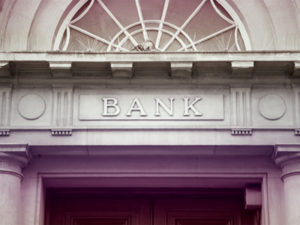 Losses are in the billions, century-old financial institutions are failing, and those that formerly lent money to the rest of us now are on government assistance; these are the darkest days the banking industry has seen in generations. At the same time, the supply of branches has increased each year for more than a decade. It would seem that few saw the current financial crisis approaching, and many believed that e-commerce would never permeate mainstream society.

Uncertainty characterizes not only the future but also the present…and good advice on what to do with all these branches has never been in greater demand.

“I believe a branch bank is the most obsolete form of U.S. retail real estate.” –K.C. Conway, MAI, Federal Reserve Bank of Atlanta.

Following is a brief study intended to help those charged with the task of counseling banks as they re-define their strategy for the acquisition and disposition of branches in a market where changes continue to evolve.

A Historical Perspective on Bank Expansion

According to Conway, the S&L crisis of the early 1990s resulted in the number of banks declining from approximately 15,000 to about 11,000. As banks got bigger and stronger, mergers and acquisitions brought them down to our current level of about 7,600. Most agree that we are headed lower from here—but this time for a different reason.

Current State of the Banking Sector

The mid-year 2007 decline of the commercial credit markets, a spike in foreclosure rates and a sector-wide downturn in residential mortgage origination combined to rock the banking business. Multi-billion dollar write-offs were announced, and institutions too big to fail are failing. The Office of Thrift Supervision said the nation’s roughly 830 thrifts lost $1.7 billion in the second quarter of 2008. As slumps in the housing and credit markets worsened, the devastation continued. In the following quarter, a loss of $4.0 billion was posted. Troubled assets, which are defined as non-current loans and repossessed assets, rose 240 percent from a year ago (from 1.00 percent of all assets to 2.40 percent), and now stand at the highest level seen since the early-1990s.

According to the Financial Deposit Insurance Corporation (FDIC), there have been 23 FDIC-insured bank closures in 2008 (through Dec. 5, 2008). Nine of these closures were in the third quarter, representing the largest number of bank failures in a single quarter since 1993. Another 73 institutions were absorbed in mergers during the third quarter of 2008, with many of these mergers engineered to avoid imminent failures. The list of recent bank failures includes giants Washington Mutual Bank and IndyMac Bank, F.S.B. Washington Mutual Bank, along with its subsidiary Washington Mutual FSB, had combined assets of $307 billion and total deposits of $188 billion, making it the largest financial institution to close in U.S. history. IndyMac Bank, F.S.B. had $32 billion in assets and $19 billion in deposits, and is also one of the largest financial institutions ever to close.

The rise in bank closures is depicted in Figure 1.

These bank failures have depleted the Deposit Insurance Fund—the FDIC’s fund that insures deposits. During the third quarter of 2008, the Deposit Insurance Fund decreased by 23.5 percent from the previous quarter. The Sept. 30, 2008 reserve ratio of 0.76 percent for the combined bank and thrift insurance fund is at its lowest point since June 30, 1994. Considering the recent deterioration of economic fundamentals, and the resulting rise in delinquent loans, some industry experts warn that there are not enough reserves to cover future closures. To replenish the insurance fund, the FDIC announced plans to raise the premiums it charges banks, and banks with the riskiest deposits may be charged the highest premiums. While that should strengthen the reserve, it would increase the financial strain on those banks already in most peril.

The FDIC had 90 banks and thrifts on its “Problem List” in the first quarter of 2008, which represented the highest number since 1995. By the second quarter of 2008, the tally of banks and thrifts designated as being in trouble grew to 117. According to the latest Quarterly Banking Profile, the situation has continued to worsen, and at an increasingly rapid rate of descent; an additional 54 institutions were posted to the list in the third quarter, bringing the total number of “Problem List” institutions to 171. The aggregate assets of these 171 troubled institutions total $115.6 billion. Worse, Conway believes that the FDIC list may understate the number of problem banks and potential failures.

In an effort to fix the problem, the government is intertwining itself with the banking system more deeply than anybody could have contemplated just a short while ago. But don’t expect the fix to be either quick or easy.

Where Are Things Headed?

Craig DeMiranda, a former transaction manager for Comerica Bank who was in charge of evaluating transactions in four states, projects that there will be increased bank mergers and acquisitions. DeMiranda believes that fewer buyers of branches will mean less demand for this property type. The authors of this article interviewed several other experts that counsel banks on their acquisition and disposition strategies and found universal agreement on these points. Contraction in this industry seems self-evident, and a reduction in the number of branches needed seems inevitable. The severity of the contraction, however, and its specific impact on demand for branches are matters of opinion.

Von W. Moody, III, CRE, FRICS, MAI, CCIM, CAE, a senior vice president at Wachovia Corporation involved in branch acquisition and disposition strategies, predicts that up to one-third of all branch bank locations nationwide could become vacant or convert to an alternative use within the next three years, either because of bank failures or mergers and acquisitions. The resulting glut of branch banks will exert downward pressure on prices. Conway expressed a similar sentiment while noting that this is a process that is already underway, and should therefore be viewed as a situation that is more of a reality than an expectation. Conway added that, “2009 will likely see an acceleration in bank failures, which will exacerbate the inventory overhang of vacant branch banks across the U.S.” Another source within the Federal Reserve believes the number of bank failures in this cycle could be as high as 2,000.

The Impact on Bank Branch Demand

Historically, branches becoming available was a function of redundant locations resulting from consolidations and mergers, and banks exiting weak or saturated markets. More recently, though, the instability of financial institutions and the questions regarding their continued viability have become increasingly important factors. DeMiranda shared with the authors his experience at Comerica Bank as it relates to demand for new branches. He reports that there was demand for bank branches as recently as the beginning of the first quarter of 2008, although demand began to diminish by the end of the quarter. Comerica Bank is not the only institution to break the trend of perpetual expansion. Moody informed us that Wachovia Corporation had planned near-term construction of 50-100 branches in areas such as Texas and California, in addition to 300 LEED green branches with the “Gold” designation. However, new construction was halted when it was announced that Wachovia would be acquired by Wells Fargo.

Other Changes in the Role of Branches

The demand for branches is being impacted by something more fundamental than the ability of banks to operate them: People are changing the way they bank. “Online banking has significantly affected how bank branches are evaluated,” reports Don Guarino, CRE, MAI, who was active in acquiring branch banks on behalf of an institutional investor. “Many people rarely step foot into a bank branch these days.”

James “Tom” Coe, CRE, of Real Estate Asset Counseling, Inc., expressed similar thoughts. Coe notes that debit cards and online banking both reduce the amount of space that a bank needs. He estimates that while most small deposits are still made at branches, 70 percent of deposits, in terms of dollar volume, is now electronic. A reflection of the changing role of branches is the way in which they are evaluated. Guarino suggests that deposit volume has become a key metric to identify the best locations; this challenges the conventional wisdom that highly prized branches are those that are successful at engaging in more high-profit activities such as lending, as opposed to simple day-to-day customer service transactions such as accepting deposits. Guarino explains his position quite simply: “How many loans do you think will be made in the next 24 to 36 months?” The authors advanced the idea to the other experts we interviewed that deposit volume has become the prime indicator for judging a branch’s location. There was widespread agreement.

Highest and Best Use and the Disposition of All These Branches

Branches placed on the open market have historically yielded the highest prices from other banks who continue to operate them as branches. Community banks have shown particular interest in purchasing branches as they seek to expand their presence while avoiding the costs of new construction. Branches purchased for alternative uses were usually those with significant functional obsolescence and/or in declining markets; for the most part, though, banks paid the highest prices for even marginal branch properties.

Our research revealed a wealth of anecdotal evidence that banks will no longer necessarily be willing or able to outbid alternative users when branches come to market. This anecdotal evidence includes opinions expressed by several brokers marketing bank branch properties, as well as some of the largest purchasers of branches. We found empirical evidence to support that view as well, including examples of where branches purchased for continued bank use sold for less than similar branches purchased for an alternative use.

Guarino provided us with an inside view of why the numbers don’t always work as they did previously when banks could and would outbid all competitors. A few years ago the metric used for the acquisition of a large group of branches for one of the nation’s largest banks was tied to the return they could achieve for a safer alternative investment. A spread of fifty basis points above the return they would expect for this safer alternative investment was considered acceptable; however, Guarino expressed the opinion that in order to reflect the increased risk and volatility with bank branches, the current spread would likely be 300–400 basis points. This could easily depress the price they would pay below what others would pay, which demonstrates how pervasive shifts in highest and best use can occur.

Despite both anecdotal and empirical evidence showing that banks may not continue to outbid alternative users for available branches, most of the experts whose opinions we sought believe that the branches with the best locations remain the exceptions. According to James Culton, who handles acquisitions and dispositions of branches for SunTrust Bank, “For the properties located in high traffic areas with low availability of new sites, banks are still willing to pay full price for these closed branches.” Moody expressed similar sentiments, indicating that banks consider some prime sites to be viewed as more than just real estate, adding that some banks have been known to purchase sites proximate to their existing locations and place deed restrictions prohibiting branch use as part of a competitive strategy.

What Does All This Mean for Your Client?

Here are the key points that counselors need to remember in advising bank clients on their acquisition/disposition strategies for branches:

What Branches Will Sell?

Who Will Buy Them?

What Price Will They Bring?

What to Expect When Marketing for Alternative Use?

We began with the observation that good advice has never been in greater demand. Given the volatility in this industry, that observation is one of the few things not expected to change anytime soon.

Geopolitical Risk was listed as the #2 issue in

Inflation and Interest Rates: Some Clarity To Mixed Macroeconomic Signals

Inflation and Interest Rates was listed as the #

The following is excerpted from the executive summ