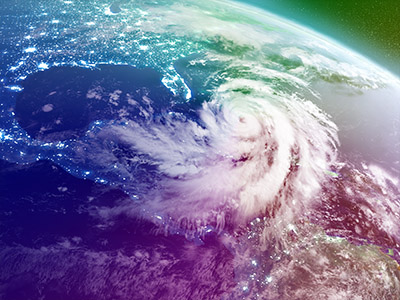 As part of the symposium titled Global Cities in an Era of Change, the Steering Committee felt strongly that this forum must address the many risks facing cities today, amongst them being natural disasters and terrorism. The objective was to understand how cities are identifying these risks and what plans are in place to mitigate them.

The panel was composed of two professionals whose area of expertise includes risk mitigation and terrorism. Heather Roiter Damiano is the Director of Hazard Mitigation for the City of New York. Graeme Wood is an author whose most recent credits include a March 2015 Atlantic cover story on ISIS titled, “What ISIS Really Wants” which detailed that group’s apoplectic ideology and origins as a radical splinter of Al Qaeda. In the first ten days after this article appeared, the story became the most read article in the magazine’s history.

Heather Roiter Damiano shed some light on vital issues given the current state of regional climate and international affairs. Damiano has nearly 10 years of experience with Emergency Management, in addition to her formal education in demography and urban planning.

Her expertise has given unique insight on how cities can more effectively plan for damages due to weather threats. NYC Emergency Management’s mission is to educate the public and make people aware of different hazards and the proper precautionary steps to take to minimize risk. NYC Emergency Management has more risk to deal with relative to other cities due to the unique composition of New York City. New York City has 520 miles of coastline, eight and a half million residents, as well as daily commuters. New York City estimates that 22 million people could be impacted by disasters that cause harm to the city. Coastal storms, an example of one such disaster, are some of the biggest threats to New York City. As a result, NYC Emergency Management has evacuation plans for over three million people in flood zones. Damiano noted that, while preparing evacuation plans, specific factors are taken into account, “How many people need shelter, how do you move people out of hospitals, [and] people who are home-bound in high-rise buildings.”

When natural disasters occur, real estate is the primary asset at risk. While different cities have different disasters to worry about, two things are equally important. First, when designing a building, it is important to think about how a disaster can affect the building. Would it be wise to place the most critical equipment in the basement when the property is in a flood zone? Additionally, are occupants prepared for when disaster strikes? Was there an evacuation plan that communicated important information efficiently to those inside the building? NYC Emergency Management helps real estate owners manage risk and limit loss. What’s important is learning from previous disasters and implementing new plans to cover vulnerabilities. Concerns with utility and transportation disruption are highly prioritized. In addition, damage assessment and debris management are the responsibility of NYC Emergency Management.

Damiano says, unfortunately, “it takes something to happen to really have people invest in the risk and acknowledge that we need to do something about it.” For example: preparing for the evacuation of transit hubs and skyscrapers. She also played a role in mitigating the damage from an explosion in East Village last March, as well as an explosion in East Harlem the year before. Hurricane Sandy, one of the most horrendous storms to hit the Northeast in the past century, destroyed most of lower Manhattan. Four hundred thousand homes were destroyed due to severe flooding. The one positive — the ablity to learn from past events and better prepare for the future. Hopefully, NYC Emergency Management can learn from Hurricane Sandy, and prepare for other climate problems down the road, such as the expected 30 inches of sea level rise by 2050. After Sandy, Congress passed a 50 billion dollar appropriation towards risk management. Damiano described NYC Emergency Management as “the central nervous system for the city … When something goes boom, we go up to our emergency operation center.” Their main priority is making sure operations go back to normal as quickly as possible. For the immediate future, Damiano and NYC Emergency Management are placing large emphasis on protecting lower Manhattan due to its obvious vulnerabilities.

Graeme Wood, an experienced journalist who has recently focused on the Islamic State, provided insight into how we can prevent terrorism in cities. According to Wood, it is first important to understand the ideology behind terrorism. Traditional terrorism is depicted by the acts of Al-Qaeda, Boko Haram and other terrorist groups. It is essentially a small number of people, probably in the hundreds, conspiring against Western civilization. Therefore, historically, it has been relatively easy to fight traditional terror groups.

ISIS changed the approach from traditional terrorism to mass recruitment. ISIS has not been subtle. In its early stages, ISIS took to social media platforms, such as Twitter, to recruit new members; they have been successful. ISIS has established a list of priorities for its followers, most importantly, come to Syria and Iraq in order to build a society. Over 30,000 fighters have come from overseas to Syria and Iraq to develop an ISIS stronghold. In addition to those from overseas, there are tens of thousands of fighters native to the Middle East This conflicts with the beliefs of Osama Bin Laden, who did not think building a society in the Middle East would be beneficial for his goals. The second priority that was listed by the ISIS spokesman, al-Adnani [Editor’s Note: al-Adnani was killed on August 30, 2016], was to “attack on site and do it on your own.” Some examples al-Adnani listed were to run someone over with your car, bash someone’s head in with a rock or stab your neighbor. Hence, these have been classified as low-tech attacks. As a result, ISIS reportedly achieves 1.4 casualties per attack; whether or not they have been successful is subjective.

What is essential to these terrorist groups is the publicity. Wood noted that lesser known terrorist groups, such as Al-Shabaab and Boko Haram are looking for more publicity. Therefore, these lesser known groups now associate themselves with ISIS in order to make more news headlines. Wood said there is currently a “race to be the angriest, meanest most violent group on the block.” This ideology is dangerous as it may cause further radicalization of terrorist groups.

According to Wood, the important question is: What is motivating people to join ISIS? Of course, there are a small number of people who are motivated religiously and believe that what ISIS is doing is in the name of God. A majority of people who are recruited by ISIS, however, are motivated by a sense of purpose. These people are simply unhappy with their lives and are looking for a fulfilling sentiment. When Wood interviewed an ISIS supporter, the supporter claimed that conforming to the cycle — work during the day, sleep and repeat — is not appealing, and the recruits want more satisfaction from life. ISIS convinced them that fighting for ISIS can give them this gratification. Lastly, the image of Muslims in Western society is not favorable to say the least. Muslims are constantly criticized and hostile environments can lead Muslims to resent Western civilization. Unfortunately, Wood believes the current solutions to these problems are slow, and could take generations to be effective.

Fortunately, not all ISIS supporters believe in a violent approach. Wood was able to identify ISIS supporters through social media. These supporters believe that, “if an infidel comes to you and he asks about the religion, you must answer his questions. You must answer them and afterward convey him to a place of safety.” This is a tradition of the prophet Mohammed. The responses were slightly skewed because Wood was unable to interview any violent supporters.

Wood addressed the pro-ISIS propaganda being spread on University campuses. Sympathetically, Wood believes that protecting Muslims’ freedom of speech is vital to helping Muslims feel accepted into American society. Allowing them to speak freely in America is what separates the United States from other countries, and Wood believes this freedom will help reduce terror attacks nationally.

One of the more complex issues to deal with is that there is no geographic proximity in which ISIS discussions take place; most of it happens online. According to Wood, America may be less susceptible to terror attacks due to the Muslims’ successful integration into society. For example, New York City has a large Muslim population, but has produced very few ISIS supporters. On the other hand, Minneapolis has produced several terrorist supporters. Interestingly enough, Muslims are better integrated into society in New York, while they may feel isolated in cities such as Minneapolis. Looking at Europe, there is a lack of identity felt by Muslims, and perhaps, that could be a reason as to why there are significantly more terror attacks in Europe than in the United States.

Another issue Wood addressed was the reintegration of ex-ISIS supporters into society. It is important to allow them to come back, share their stories, the fear within them, to people who are on the verge of joining ISIS. This could be beneficial by instilling fear into potential ISIS fighters. It is obviously important to first separate those who may be dangerous from those who can be used to prevent others from going. Wood briefly addressed the issue of Sunni versus Shia. ISIS is a radical Sunni group, and holds the belief that the Shia are apostates. Originally, ISIS killed Shias, but after influence from Bin Laden and Saudi Arabia, they diverted their efforts elsewhere.

According to Wood, “We have to look at and find out why one community seems to feel isolated, seems to feel that its only identity is its own, and other communities feel well integrated. That’s what we’re looking at going forward, and that’s also why the United States in particular should probably be quite a bit safer than Europe.”

Our cities are at risk from both natural and man-made threats. It is our job as citizens to help lessen the effects of these threats by preparing for, and thus minimizing damage from, the events we can’t control, and attempting to prevent the acts from coming to fruition in the cases of those we can. Damiano believes it is not only important to have a well-thought out plan, but it is also imperative to practice that plan in order to anticipate problems before an emergency occurs. Wood feels, in the cases of man-made threats and terrorist attacks, that, instead of simply attempting to make cities more difficult to destroy, we go straight to the source. We need to show immigrants they can flourish and be successful and integrated members of the community, while still retaining their ethnic identity. They won’t need to go elsewhere for acceptance and will have a stake in where they reside. Investing the time to protect your community, your city, both personally and practically, is the key.